The pre-war rust-bucket taxi dropped Liam during dusk’s golden hour—the whole world a stage. Liam Gallagher dripped out. The sun backlit his lithe frame. He arched and reached to heaven. He knew he looked delicious.

Liam looked around Nixon’s suburban fever dream. The house was brick. Ivy covered the street-side. The neighborhood was new, so the ivy was phony. Liam hated imitation.

A sign penetrated the emerald yard. “Re-Elect Gallagher. Sheriff. Republican”. The placard, and the thought of the Sheriff, made his stomach bubble. Liam pushed the sick away and gathered his composure.

He glided to the door.

The foyer smelled of perfume and “My Way” played from a turntable. A shadowbox with medals from the Japanese campaign hung on the wall. On that same wall, a lonely nail drew Liam’s eye to a dark spot—the sign of a removed family portrait. Liam had lived this scene a thousand times, the trick was hiding his secret.

Liam studied the John—soft, on the wrong side of forty. Liam couldn’t wait to fleece the schmuck.

“I’m James,” the hand reached out.

“Sergio,” Liam said. He was sure James’s real name was not James. Liam loathed fakes.

“And you look too handsome to be buying company,” Liam lied.

“I buy discretion. You’re so… vibrant. How old are you?”

Liam grinned. “Let me freshen up.”

In the bathroom, he undressed, splashed his face, and gargled mouthwash. Once ready, he exploded out, arms spread, let James see what his money bought.

James had melted into the background.

Sheriff Gallagher had solidified in the foreground.

“Liam.” The large cop said. “Thought you were through with the rough trade?”

The Sheriff flicked his chin. “That’s all James.”

The Sheriff grunted. “Aren’t you tired of debasing yourself?”

The Sheriff picked up a towel and threw it at Liam. “Cover your shame.”

The towel fell to the carpet. Liam gyrated. “You’ve seen it before.”

“Don’t need to see it again.” The Sheriff said. “You told me you were getting a job in sales…”

Liam ran his hands up and down his flesh. “Oldest sales gig around.”

“Stop.” The Sheriff pinched the bridge of his nose. “You’re so exhausting.”

Liam felt the familiar guilt and regret and hated himself for an instant. He stepped forward. “Dad.”

The Sheriff released his nose and smashed his palm into Liam’s chest. “Sheriff.”

Liam’s backside hit the floor. “You always cared more about the job than me.”

A tear rolled down the Sheriff’s cheek. “I love you more than you know.”

“Bullshit.” Liam spat. “False piety. I remember every time you smacked mom. How do you think I ended up like this? We both know it is all your fault.”

“You’re an adult. You made your own choices. I’ve changed.”

“I stopped drinking and started therapy. I’ve made myself a good man.”

“Liar. I’m the only good man left in this Godforsaken shithole.”

“You’re a drug-addicted prostitute.” the Sheriff said, wiping away tears.

“You only care because I play for the wrong team.” Liam grabbed his crotch and motioned to his father. “Hide the fairy-boy, right, Daddy? Bad for elections.”

“That’s how God made you. I accept what the Lord decrees,” the Sheriff said. “What I can’t accept is you being a junkie whore.”

Liam jumped up and got in his dad’s space. “Fuck yo—”

Liam didn’t see the backhand. He did see the stars.

Liam woke alone in a dark cell, blood in his mouth. The space was cold and gray and pure. Liam reclined on his concrete slab, content. 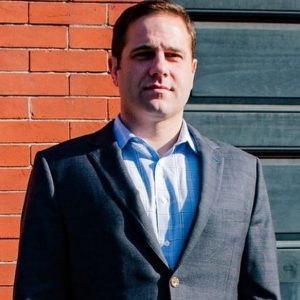 J.B. Stevens lives in the Southeastern United States with his wife and daughter. He was nominated for the Pushcart Prize for poetry, was a finalist for the Claymore award, and won Mystery Tribune’s inaugural micro-fiction contest.

His pop-poetry collection The Best of America Cannot Be Seen, published by Alien Buddha Press, is available wherever books are sold. His short crime fiction collection A Therapeutic Death will be released in spring 2022 by Shotgun Honey.

J. B. is a veteran of the Iraq war where he earned a Bronze Star. Prior to the war, he was an undefeated Mixed Martial Arts Fighter. He graduated from The Citadel.