I know how this must look. Here I am, standing in his apartment, holding a gun in my hand, while he is lying flat on his back with a huge hole in his forehead. I admit, it does look suspicious, but it’s not what it looks like at all.

I’m pretty sure his friends are going to testify that I was following him -or rather stalking him, as they would call it – but that’s a lie. There was no need for stalking him. He never really meant to break up with me, even if he said so. It was just a moment of anger because I was maybe a little too clingy. I knew we would sort it out eventually but only if he wasn’t allowed to forget me. I knew that deep down inside, he didn’t want to move on. He just needed a little bit of time on his own and to think of a good way to ask for my forgiveness. He shouldn’t have worried so much. Sure, it was a shock when he told me to “get the fuck out of my life and leave me alone”. That and being informed that he never really fancied me because I was too fat and too annoying, was hard to take but still, forgivable. Most of the girlfriends of his friends are of the anorexic type while I am curvy. Peer pressure’s a bitch. Even in the beginning, he never admitted that it was because of my curves that he’d felt attracted to me in the first place.

Jealousy is an ugly word and an ugly feeling. I’m a generous person; I have hardly ever felt jealous in my life. I certainly didn’t when I saw him with that skinny little tart. That was hardly a competition, now, was it?  As flat as a surfboard, as tall as a giraffe, and with natural blonde hair. Who would fancy that? I never even thought that he was having an affair with her. The only reason why I followed them was that I was worried because I’d heard she was the hysterical type. I could very well imagine what someone like that would do to him if she found out he was just having a bit of fun.

It did hurt me at first when I saw them kiss in the park. She put a lot of passion into that kiss. He seemed rather reluctant. If he’d gotten a chance to fight her off, if she hadn’t been sitting on his lap, practically nailing him to the bench, I’m sure he would have fled.  In any case, it got me worried even more. She would rip him apart given a reason. The moment I saw them heading towards his apartment, I ran home to get the gun. I might have to defend him.

By the time I arrived, they had already finished. Hardly what I would call passionate. I saw her getting dressed while he was lying on the bed, smoking a cigarette. The bedroom window was open and as it’s a ground floor apartment it was easy to climb in, even for me, and I’m not exactly the athletic type.

I wasn’t surprised she started screaming the moment she saw me. It was quite typical of such a highly-strung, crazed bitch.

“Get out of my house, you psycho,” he yelled.

Finally, he was telling her to get lost. It was about time. I wasn’t sure why he was looking at me, though.

The expression on her face told me she was furious. Being brushed off like this in front of someone else must have stung.

Things got a bit chaotic from then on. He jumped out of bed and was between us in a flash while she yanked him back, ready to attack him. I couldn’t let that happen. I aimed and shot at her, but the bitch hit the dirt and he ended up dead on the floor. I may have pulled the trigger, but she’s the one who got him killed. 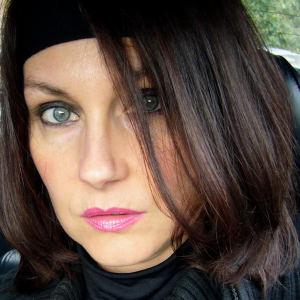 Caroline Couderc is a multilingual writer and translator, living in Switzerland and the UK. She writes crime, literary fiction, and speculative fiction. Her work has been published or is forthcoming in Fine Linen Magazine, Boston Literary Magazine and Daily Science Fiction. You can find her online at Beauty is a Sleeping Cat and on Twitter @BeautyandtheCat.