Cooking fires smoldered, bull frogs croaked and the occasional dog barked as me and Green Johnny stumbled through the poorly lit center lane of the sleepy Stetson River RV- Park at three in the morning on a Tuesday night. Connor Dawkins’s rig was three units on the right and we could already hear the muffled thump of the Wu-Tang Clan and smell the pungency of some expensive weed.

“Guess we know where the hundred thousand went,” I said to Green Johnny, pointing to the Mercedes and Lexus emblems on the cars parked out front.

We crept up next to the RV door.  Green Johnny pulled out his nine and screwed in the silencer. I pulled out my Bowie. Guns are good for an initial shock, makes people question their mortality.  Knives, though, make them question their pain tolerance.

I counted down from three and Green Johnny ripped open the RV door. Inside, a naked brunette was wedged in between Connor Dawkins and some hairy man with a scar on his cheek. Green Johnny killed the Wu-Tang soundtrack with a bullet to the stereo.  The brunette shrieked, dislodged herself, grabbed a sheet and cowered in the far corner of the rig.  Scar-guy made a move towards the couch and Green Johnny put a bullet into his naked thigh, clearly nicking the femoral; he’d probably bleed out in a couple of loud, blubbery minutes. While his bleeding friend screamed, Connor Dawkins stood there, naked and pissing himself.

“I don’t have it Priest, I swear,” Dawkins said, wincing each time scar-guy screamed.

“Now Connor,” I said as I walked over and put my knife underneath his scrotum, “I really hoped you’d be smarter than this.  You see your friend over there, right? He’s screaming like a bitch and he was only shot in the leg.  Can you imagine how loud a man screams when he’s being castrated?”

“Green Johnny put in your ear plugs.  I think Connor here’s a screamer.”

Green Johnny reached into his pocket, I tightened my grip on the knife and Dawkins broke.

“Alright, alright, it’s gone.  I bought some shit for Stacy and Trevor, some clothes and cars.  We all smoked and snorted the rest.”

“Who are Stacy and Trevor?”

Dawkins reluctantly nodded toward the brunette in the corner and the now quiet man on the floor.

“Well shit Connor you made $100,000 disappear in a week.  I’m impressed. Green Johnny, you impressed?

“I’m impressed,” Green Johnny said. “He must be a witch.”

“A witch, huh? I like that. Connor you know what they used to do to witches?”

Dawkins started to cry and his knees wobbled.

“They would tie them up thumbs to big toes and toss them into a body of water.  If they floated they were a witch and were executed on the spot. If they didn’t float they drowned and were able to be buried on holy ground. Green Johnny here thinks you’re a witch.  I have my suspicions as well. You know, there’s only one way to find out for sure.”

We forced Dawkins and a sheet-wrapped Stacy out of the RV toward the Stetson River. Stacy tripped coming out of the rig and hit her head on the bumper of the Lexus, the thud of her head a discordant addition to the chorus of bull frogs.

“Looks like we have one less witness, Connor,” I said, glancing at Stacy and nudging him with the Bowie handle.

With Green Johnny holding a gun to his head I tied Connor’s thumbs to his toes and threw him into the river. It only took a minute for his naked ass to disappear beneath the water. We waited a few minutes to make sure, but it seems that Connor Dawkins was not a witch. 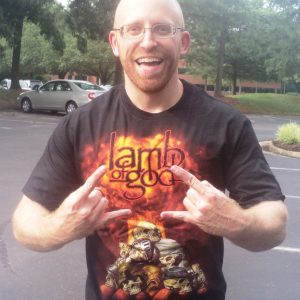 Zach Wilhide lives in Virginia Beach with his wife. He currently teaches politics at various universities in the Tidewater area and is an amateur power lifter.  When he's not teaching students about the vagaries of the Electoral College or lifting heavy objects in the gym, he's thinking and writing about the darker side of humanity.  For now, his work appears exclusively on Shotgun Honey.