My father once told me that I should learn from his mistakes and not from my own. He overestimated my abilities. It’s what I wanted to tell him when we put his body in the ground. It was too late for words, but I was certain he was listening.

I fell in love with the wrong people a lot, just like my father. His third wife was at the grave that day, fresh as dew, dabbing at dry eyes for the sake of appearances.

My father did teach me things that stuck: Always have a nightstand gun, but remember that shotguns are best for most home defense situations. Know when to keep your mouth shut, and when to open it. Use people’s hubris against them; they’re begging you to do it.

It was shortly after my father’s death that my husband hit me on the face for the first time. Before that, he didn’t want to leave obvious bruises, but he had started feeling himself, getting cockier. I knew what that meant. I’m only a fool sometimes.

He was drunk when he told a friend of his that he was thinking of “getting rid” of me. He had a strangely impressive plan that involved swerving into a wall and unbuckling my seatbelt at the last second. What if I didn’t die? “He said he’d find a way to finish it.”

When my husband introduced another person to the dirty little secret he and I had shared — the arm-twisting and yelling, the long showers I took to wash him off of me — a fog burned away. The pity in the friend’s darting eyes nicked me to the boone. I knew then that other people knew. That my father probably suspected.

When I left, I didn’t tell anyone as to where I was going, but I still left a trail. Whether it’s social media, or the off-hand things we say to family and friends, we all leave a trail. It’s hubris to think otherwise.

Glimpses of the man I’d fallen in love with flickered in the rearview as I went. The way he could tell a joke, or own a room. The way he kissed me, like I was the only thing that mattered in all of creation, down to its last atom.

My father’s cabin sits high in the woods of West Virginia. At this time of year, there are spiderwebs thick as hammocks strung between the trees here, and whip-poor-wills that call out as it gets dark. My father used to take me here and have me practice my shooting. Rotten sofa cushions came first, cracked shot glasses came by the end.

The sound carries, but it never bothers anyone in the valley or on the trails. This is gun country — the fences may be gap-toothed, but people mind their own business.

When I was little, we lit fires after dark. Moonlight tore through the clouds to reach us. Those were good times, and I knew it then.

My husband has nothing to lose. People use that phrase a lot, but it’s true on his account. He has no one he wants to make proud. Even his friends are not his friends, if you consider what big mouths they have.

I wonder if it was my father’s pretty third wife, now his pretty widow, that helped my husband guess my location. She’d always hated this place. Maybe she felt her significance reduced here, her beauty obscured by clouds of gnats.

Outside, the dew is turning gem-like in the spider webs. Inside, I sit in the deepening dark, with a clear view of the front door and the tripwire strung in front of it. My husband will kick the door open. He has always been one for grand entrances. He has never really known me. 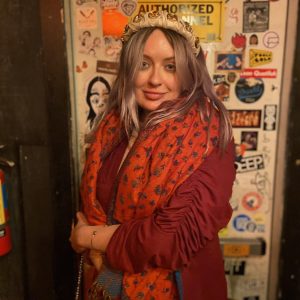