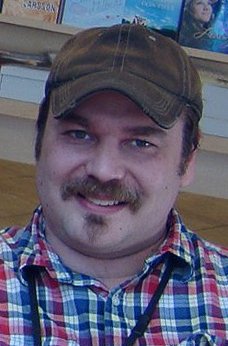 Twas hotter than a Tennessee showgirl underneath six buffalo blankets, but the idgits in Blind Gulch came out anyways, eager to get a glimpse at the strangers.

Their half-dozen wagons were drawn up single file in the center of town. Each wagon was caked in dust, dimming the bright stars, moons, and flowers that had been painted on the sides. The drivers, stern-faced bearded men quietly watered their horses as the locals looked on with hot dusty contemptuous faces.

“Gypsies,” Courtney Anne said from the steps of Professor Pauley’s Office of Dentistry. “Thieves and liars, every one.”

“I hope Ol’ Andy hornswoggled them on every penny,” Mrs. Betsy replied.

Heads turned as the door to general store swung opened. Out walked Ol’ Andy, puffing on one of his Mexican cigars. He was followed by a tall raven-haired woman, who seemed to speak for the travelers. Her features were sharp and exotic, smoky dark eyes and shimmering bronze skin. She wore a white blouse with embroidered roses that matched her scarlet dress. Odder then the colt on her hip was the small chittering monkey that sat on her shoulder.

She stood with Ol’ Andy on the porch of the general store, watching as Andy’s boys carried sacks of flour, beans, and what not out to the stranger’s wagons.

Things seemed fine, until Ol’ Andy’s dog caught sight of them. He started barking and carrying on, the whole while his eyes are locked on that monkey.

The dog’s name was Laramore, half shepherd and half Labradore. He was stocky with one remaining tattered ear. Where he wasn’t covered with scars and bite marks, Laramore’s fur was coarse and jet black.

He jerked against his chain, snarling and thrashing, foam frothing from his jaws. Ol’ Andy yells at him to hush, but that dog is damn near choking itself to get a bite of that monkey.

Now, the whole time, the monkey is just loving this. It’s racing back and forth over the woman’s shoulders, a squeaking and a jumping, taunting Ol’ Andy’s dog.

You remember Devon, the one-eyed feller that used to play the piano over in Tankersley’s?

He jerked against his chain, snarling and thrashing, foam frothing from his jaws. Ol’ Andy yells at him to hush, but that dog is damn near choking itself to get a bite of that monkey.

Well, he leans over the rail around the saloon and yells out, ”Better mind your monkey, ma’am.”

Folks laughed for a bit. The dark-haired woman, she don’t laugh.

After they quieted down, the woman yells back. “If that beat up old hound got off his chain, this little monkey would make him sorry he did.”

A low whistling sound escaped the crowd; they knew a challenge when they heard it.

I could see the idea forming in Ol’ Andy’s eyes before he opened his mouth. He knew, just like everyone in town, that Laramore was undefeated in Kassa County in both dog fighting and bear baiting.

“That sounds like a challenge.” Ol’ Andy said, pulling his cigar from his puckered red face. “Perhaps we should have a little wager, miss?”

She nodded at the monkey. “Her name is Julia and if you’re willing to make wager, we might arrange a friendly competition.”

Ten minutes later, the town had huddled in a circle. On one side, Andy’s boys clung to Laramore as he snarled, pulling against the chain. On the other side of the circle, Rachel waited with her hands on her hips; Julia perched calmly on her shoulder.

Ol’ Andy declared that if the monkey won, the strangers could take their supplies free of charge. In return, the raven-haired women, promised to pay double the worth of the goods if Laramore was victorious.

Frank Larnerd is an undergraduate student at West Virginia State University where he has received multiple awards for fiction and non-fiction. Recently his stories have appeared in LOST CHILDREN: PROTECTORS and DARK DREAMS PODCAST. His second anthology as editor, STRANGE CRITTERS: UNUSUAL CREATURES OF APPALACHIA will be released in the fall of 2013 from Woodland Press. For more visit: www.franklarnerd.com

Motioning for attention, Ol’ Andy stepped into the circle. “Now when I drop my cigar, my boys will let loose this dog. You might want to make sure that monkey isn’t on your shoulder when I do.”

Ol’ Andy tossed the smoldering butt into the circle. As it hit the ground, his boys let loose on Laramore’s chain. The dog surged forward, snapping and growling.

The monkey leapt from Rachel’s shoulders, landing gracefully, rolling onto the parched sand. Dodging a frenzy of teeth, Julia snatched up Ol’ Andy’s cigar and jumped up onto the dog’s back.

The crowed howled in laughter as the monkey clung onto the dog’s tail, puffing away on Andy’s cigar as Laramore whirled around in circles.

Chattering gleefully, the little monkey poked the burning end of the cigar against Laramore’s butt hole. The dog let out a painful yelp and charged into the crowed, trailed by a cloud of cigar smoke.

The people screamed, scattering every which way as the frantic dog raced around their legs and under their dresses. From the dog’s back, Julia chirped happily, puffing and singing Laramore’s hindquarters as she rode.

Amongst the commotion, Rachel climbed aboard the lead wagon.

As she snapped the reins, she called out to Ol’ Andy. “Pleasure doing business with you.”