‘Alright Eddie, what you up to tonight then?’

I recognise the copper that’s stood driver side of my old Bedford van but I can’t remember his name – and it’s not a priority to be honest. See, I’m a little distracted. I don’t like being able to smell a copper’s breath at the best of times and this fucker couldn’t have picked a worse time to pull me over. It’s hotter than the sun inside this van tonight and the stench of the hacked up corpse in the back has made me gag a few times already. Mixed with the smell of copper it’s making me feel sick for all sorts of reasons. If I can smell it, it’s not going to take long for this fucker to sniff it out. I’ve got to get shot of him sharpish or I’m looking at a life stretch that there’s no way I could survive.

‘Just finished a job at a customer’s house officer,’ I lie.

‘A customer? What line you in now then Ed?’

I still can’t remember this copper’s name, but he clearly knows who I am.  So, he probably knows that I don’t really have a line that I’d discuss in polite company – or with the Old Bill.

I say the first thing that pops into my head, ‘Carpentry.’

‘You’ve just finished a carpentry job at five past midnight?’

‘Yeah, um, it was an emergency job.’ Fuck, should have said plumber or something. Who’s heard of emergency door swinging?

‘Right, well I stopped you because you have a taillight out,’ the copper says. There’s more than a hint of doubt in his tone as to my story but he don’t seem interested in doing a thorough job. God bless a lazy copper, quick ticking off for a dodgy taillight and I’ll be on my way.

But fuck no, did I just see his nose twitch?

‘What the bloody hell is that smell Eddie?’

Shit. Yes, definitely a nose twitch. And, now he’s wearing a face similar to the one I’ve been trying to hide since he’s been stood there.

‘Oh, you know, I just need a shower after working,’ I wouldn’t convince a six-year-old with that line, but then I’m only dealing with a copper so I’ve still got my hopes up.

‘No, it’s not that. There’s something wrong in the back of your van,’ the copper says through the hand he now has protecting his nose. ‘You’re going to have to open it up. I need to take a look.’

Why the fuck couldn’t he be a lazy little prick like his colleagues.

I could just whack the Bedford into gear and drive off. But no, that ain’t going to work, he knows who I am. Even if I get away tonight the fuzz will be at my door quicker than flies around shit.

There’s no way I can do time. I won’t last more than a day inside – too many people in there want me dead. When I helped Tony Ricco take over this city’s criminal activities a lot of people got stitched up. A lot of them are now inside thanks to deals we struck with certain bent coppers. Funny thing is, tonight is another job for Tony – I’m not even responsible for the stinking flesh behind me, not this time. Tony called me up and asked me to do a bit of waste disposal – and when Tony asks, you do.

I’ve got a few quid on me. I could see if this little piggy wants to put his nose in the trough like the officers that helped Tony get to the top. But if he doesn’t then I’m really fucked. He’ll know something is up, probably radio for back up and then I’ve got more of his mates to deal with.

‘Come on Eddie, out of the van,’ trained authority affects the coppers tone. I’ve been thinking my options through for longer than he’s prepared to wait.

I step from the van, the wheel wrench from the passenger seat held low and tight to my side – out of sight. I’ll be digging a hole big enough for two tonight. 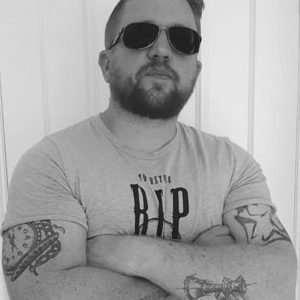 Aidan Thorn is from Southampton, England. His short fiction has appeared in Byker Books Radgepacket series, the Near to the Knuckle Anthologies: Gloves Off and Rogue, Exiles: An Outsider Anthology, The Big Adios Western Digest, Shadows & Light, Hardboiled Dames and Sin as well as online in numerous places.

His first short story collection, Criminal Thoughts was released in 2013 and his second, Tales from the Underbelly in 2017. In September 2015 Number 13 Press published Aidan’s first novella, When the Music’s Over In 2016 Aidan collated and edited the charity anthology, Paladins, for the Multiple Myeloma Research Foundation, working with 16 authors from the UK and USA to deliver this project. 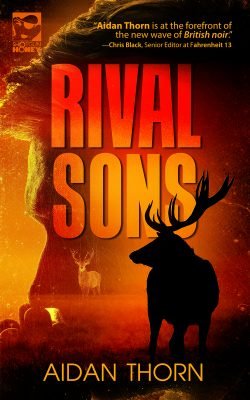