The outside tables hadn’t been cleared. Half-eaten chicken carcasses sat amongst piles of abandoned fries, scrunched napkins, and upended bottles of chili sauce. A heated breeze funnelled down the street, picking up one of the napkins and carrying it over to the neighboring restaurant. Two teenage girls in identical aprons rested their elbows on the bar out back, their attention drawn by a river ferry cutting through the brown water.

A grizzled ibis on the table next to me took a break from picking at a chicken carcass to eye my steaming bowl of fries. When he returned to his open ribcage and jabbed, I felt as if the bones he worked on were mine. A few of its brethren milled around not far from my feet, biding their time. They call them bin chickens, tip turkeys. To me they’re the vultures of the city.

I thought about how it would be easy to hate the filthy scavengers of the world for being diseased, sly, and opportunistic. They’re associated with death, another easy target for our rage. But together they bring balance, and besides, without them what would we do with all the corpses?

The ibis tilted its beak, a long and curved black thing like a medical instrument, then hopped to my table and stole a chip, its pronged feet scratching on the aluminum. I pretended not to notice.

A pale hand rested on the chair opposite and aluminium chair legs clattered on concrete. The man who sat down looked just like an ibis. Long black hair was gelled and slicked back from a prominent white forehead, above little ibis eyes. There was nothing in there, only more black. He wore a black leather jacket over a dirty brown Hawaiian shirt. The pale hand produced a stack of paper and slid it across the table, nudging the fries aside.

The teenagers behind the bar had forgotten the river and were now deep in conversation. A customer waiting at the kiosk checked his watch. The ibis plucked a strip of chicken free.

“Just business mate,” the man who looked like an ibis said. The real ibis tilted its head back and swallowed.

“True,” I said, my mind playing with a thought about business and survival in the wild. The balance required for an ecosystem to thrive. A restaurant needs a river of foot traffic, easy access to raw ingredients, and good people to run it. A chicken and chips franchise like this dies if you mess with the formula.

The man was still talking. Something about franchise fees. The ones he’d steadily increased every month, forcing the wages down and the good staff out, drying up the river and summoning the ibises. I didn’t really blame him, it was in his nature as a scavenger.

I took out my silver hip flask and gently unscrewed the lid.

The ibis had left the chicken alone, and was now standing on the edge of a steel rubbish bin just past the dividers near the entrance. Its movement was suddenly less sure, its feet dancing on metal, then its body hit the pavement with a sound like a leather football bouncing.

The man swiveled his head but didn’t see anything. “No point waiting around, you might as well sign.”

“True again sir,” I said, and scrawled my signature with the offered blue pen. I took a long draught from the hip flask. An inscription on the side glinted in the sunlight. Forever yours, it said. What it should have said was: ‘yours until bankruptcy.’

The man took a handful of fries from my bowl. “Catch you later mate,” he said.

He grinned and shook his head to himself on the way out, stuffing a few fries in his mouth and walking right past the dead ibis without noticing.

The rest of the whiskey slid down my throat as the brown current flowed by. The last of the cash from the restaurant account now safely on its way to my liver, I finished my fries and tried to ignore the bitter taste. I closed my eyes. 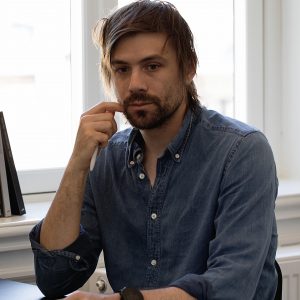 Sean Melrose-Aukema is an Australian writer and proud dad based in Norway. When he's not at the keyboard guzzling coffee, he reads, plays video games, and if he's feeling particularly inspired sometimes he laces up his runners. You can find him on Twitter @seanmelrose.