Belinda’s grandmother, who insists on being called Gabby, wears classic t-shirts with the images of bands fading across the front. Fleetwood Mac is missing most of Lindsay Buckingham. The Grateful Dead are mere ghosts of themselves. Heart’s “Dreamboat Annie” has sunk. Sixteen-year-old Belinda loves the way they look on her skinny grandmother and is certain they would look even better on herself.

When she visits after school on Mondays and finds Gabby dozing upright on the couch, her bunioned feet resting on the coffee table, Belinda sneaks upstairs, and quietly opens Gabby’s dresser drawers to feel the soft cotton tees between her fingers. This kind of softness can only come after years of washing and wearing, years that Belinda would have to wait if the old woman snoring downstairs hadn’t been a band fanatic, loving the bass guitarist as much as the lead. Belinda strips off her own graphic top, the one she bought at Target, black with Mick Jagger’s red-red tongue sticking out, and pulls on the Lou Reed, humming “Walk on the Wild Side.”

“What the hell do you think you’re doing?” Gabby says at the bedroom door, silver hair hanging past her breasts, mouth moving in and out in disapproval.

“Oh. Well. See. There’s this dance at school. A Throwback Thursday. On Thursday. This Thursday. And—”

“What’s wrong with Mick?” Hands on her hips, she nods toward the discarded Stones’ T-shirt on the floor. “I know you like Mick.”

“I do, but you know, everyone likes Mick. I—I wanted to be different. Authentic.”

“You always say no.”

Belinda stomps her foot. “See. That’s why I don’t ask! You always say no.”

That night, Belinda lies in bed, staring at her ceiling with its galaxy of plastic glow-in-the-dark stars, her head crammed with malicious midnight schemes. She wants that t-shirt. She wants all those T-shirts.

“And Belinda wants what she wants,” she whispers before turning a shoulder to her ceiling stars.

She visits her Gabby after school the next day.

The old woman, a little surprised, says, “I was just going to watch ‘High Fidelity.’ C’mon in. You’re letting in all the heat. Sit down.”

“Sure,” says Belinda, shifting her backpack to the other shoulder.  “You want your cocktail now or later? I’m dying for a Diet Coke.”

“That would be lovely.”  Gabby waves the VCR controller in the air and flicks on the movie. “Hurry up, now.”

In the kitchen, Belinda drops her backpack on a chair and grabs a Diet Coke and her grandmother’s cranberry juice from the refrigerator. She pours a little of Gabby’s juice into one glass, her soda into another, splashes gin in both.

Out of her backpack, she pulls a large yellow bottle, a bottle she bought at Ace Hardware on her way to Gabby’s, a bottle she told the clerk she was getting for her dad who was stocking up for winter even though it was only October. “He was an Eagle Scout,” she told him. “You know, be prepared. In case it snows early?”

She looks at Gabby’s glass one-third full of cranberry and a splash amount of gin, and fills it to the brim with antifreeze. She’s done her research. It’s sweet, tastes good. The old woman will guzzle it down.

When she walks back into Gabby’s living room, Belinda hears John Cusack talking about kids playing with guns. She smiles. There’s a better way.

The next day Belinda wears one of her new-old vintage T-shirts to school, Iron Maiden. Tomorrow, she’s thinking, something lighter like The Eagles. 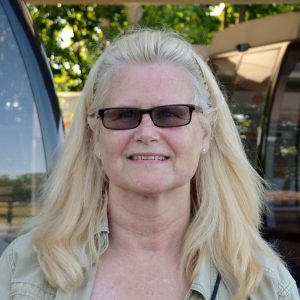 Gay Degani has received nominations and honors for her work including Pushcart consideration, Best of the Net, and Best Small Fictions. Her flash and short story work has appeared online, in print journals and in anthologies. She has published a collection of eight stories, Pomegranate, a full-length collection, Rattle of Want, (Pure Slush Press, 2015) and a suspense novel, What Came Before (Truth Serum Press, 2016). She occasionally blogs at Words in Place.