The smell of fish woke him.

Fish for breakfast was nothing new, but Squatch’s nose detected a difference: Not the same old ranch-raised polkek but wild, free-swimming zoomy.

It was Frank’s turn for frying and he had the battery lamps on max making the galley too bright for Squatch’s comfort. Still he’d trade that for the sickly, dim-green glow of algae lamps. Besides he was hungry.

Jonesey and Siddarth had made quick work of the zoomies and sat over empty plates shooting the shit with Frank.

“Say she went out the APU… had a machinist’s key.”

“Stashed in that violin prolly.”

Only Frank acknowledged Squatch enter, giving a quick nod. Squatch drew a mug of poshtoon flower tea and took a far seat at the communal table. The tea’s damp-cellar earthiness was one of the few seastead flavors that’d grown on him.

“Two escapes in as many weeks? What in hell?”

“They outta stick her in a maxi landside.”

“Fuck the Landers!” Frank spit into the sink. “Besides she’s just a kid.”

“Is she? Hard to tell when they’ve gone feral.”

“So is aiding and abetting, ain’t it, Squatch?”

“Huh?” he said and paused between bites from the plate Frank had set down. “I wasn’t listening.” He lied. He’d been listening so hard his balls ached.

Squatch shrugged and went on eating. He was a shitty steader. He’d go back landslide in a heartbeat if he could. Nothing good had happened at sea. Well, almost nothing.

He’d found her holed up in the billet of FF33–the Circle-Bar’s remotest, least tended piscary. She sat cross-legged tuning a violin. She was tinier and prettier than in the news photos–sexy was the word that came to Squatch’s mind.

“Oh, my, I’ve been found out,” she’d said indifferently. “Caught trespassing and by a Lander no less”

“Your gait, heard you heavy-walking.”

Like a Squatch, he wondered? The nickname the wranglers had given him was derogatory, but he’d never learned why.

“Oh, don’t pout,” she said, “it’s terribly unbecoming.” She set the violin aside and patted her hand on the blanket. “C’mere.”

Her lips were sweet, the sweetest in all the worlds, and there was the deep languor of youthful bodies. They’d lean heads on each others shoulders until the fever overtook them and Squatch lifted her shirt and kissed her tawny girlish breasts with the points puffing up like unripened seaweed bubbles. Coming to, she’d warm tea and they’d drink it sensing the current swells rolling beneath, talking of everything and nothing at all.

She brought her lips close. “Like fish?” She whispered, her breath hot, wild.

“Like fog over wet sand,” he said, taking her earlobe between his teeth.

And they’d start over again…

He’d just finished the final checks on the scrubbers when the girl approached. She’d put her long auburn hair in a loose plait.

“I’m leaving,” she announced. Squatch keyed the system back to auto with a heavy click. “Tomorrow…,” she hesitated, backlit with setting sun and a still ocean, “you know, business and all…”

She didn’t ask him to come along. He couldn’t have anyway. Still it stung. So did her leaving during the night without saying goodbye. Later he reckoned it was better that way–a final, sweet gesture.

Squatch was washing up when the foreman appeared.

“Get plenty of zoomy?”

Squatch’s heart pounded up into his throat.

The foreman held up a hand. “Before you say anything, take this.” He handed Squatch a watertight parcel–wax sealed with the Circle Bar brand and addressed to VENEIDA.

“From the Patrón.” The foreman arched an eyebrow. “If you see her.”

Squatch flipped through jealousy to rage to bewilderment then settled on apprehension. “Am I in trouble?”             “Best get a move on,” the foreman said. “Already been too long.” 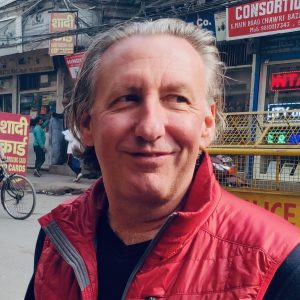 Edward Cossette is a writer, educational games developer, and determined bon vivant. He leads a life of quiet, contemplative routine occasionally punctuated with great adventure. Find him at edwardcossette.com or @edwardcossette.