I getcha. You just wandered into this party like it’s one of the other parties on this block-cauldrons of frat boys in rugbies and girls shaking their asses in high-waisted shorts, the mixed scent of cheap beer and weed.  You figured you’d put up that grey hoodie of yours, tuck your head, and tip-toe around the room, eyes peeled for fake tits, ears perked for the smell of perfume that says yes please, there’s a room upstairs and I’m all yours. You have a condom in your back pocket, but I would check the expiration date on it. You’ve never had to use that thing, have you? I can tell when a man’s never seen pussy.

You won’t need the rubber, though, because this isn’t a frat party and you’re not going to be able to duck under the cover of black lights and disappear into the thundering base of that shit you kids call dance music. Oh it’s dark here, and there’s music, but not the kind that would make sense to you. There was a time when if you didn’t fuck to jazz and piano, you didn’t fuck at all.

You’re not the first person to accidentally show up here, and I can’t fault ya, kid. This property is in your part of town now. We used to force you little frat shits out years ago, but you multiplied like a virus. And my people? We still have pull, but we can’t just punt you out like a football. Not anymore. The thing is that we didn’t feel like screwing off, either. Pop Carl has had this place here long before you were sperm. So we just stuck around.

I’m going to do you a favor. Not because I’m a nice guy. I’m not. I used to fold people like you up like leftover pans of meatloaf and run them through garbage disposals. You ever run a human hand through a garbage disposal? It’s like a wood chipper mixed with a wooshing sound. Awful.

Listen. You made it to the back of the room without anyone else noticing, but I wouldn’t take your chances on the return trip. Just stay tight against that wall, and head for the back door. Don’t knock over Pop Carl’s fish tank. He loves those fish more than his mother. Once you get past the fish tank, sneak along that curtain, the purple one that looks like hotel carpeting, and duck out the back door and run.

Hurry.  In a few minutes, you won’t want to be here. See, Pop Carl’s nephew stiffed me on some cash, and he knows it. Look around. See the giant, untouched cupcake display in the center of the room, with the cutout of Marilyn Monroe, showing everything that God gave her? I offered to take care of the catering myself. Call it a gesture of goodwill. Here’s what nobody else knows:  those cupcakes are filled with enough cocaine to get half this room sent away for three lifetimes.

An hour ago, I gave some kid like you an envelope with a note in it. It’s to be taken straight to the police in, let me check my watch, five minutes ago. The kid did it for a case of light beer. You millennials. You’ll do anything for thirty rounds of carbonated piss.

Pop Carl doesn’t own the police anymore, so when the little boys in blue get here, he and his people will fire first. Pop’s men will throw off a few shots, and the room will fill with bursts like fire crackers. The walls will grow dozens of bullet holes.  Blood will splatter onto the floor, and Pop’s boys and whores will drop and lay, wide-eyed and stupid. I’ll probably be among that number. I might just sit and play the piano until someone puts one in my temple. I want to live, but I want to see the fireworks even more.

I don’t know why I’m telling you this. Maybe my heart grew three sizes today, like that furry green thing from the Christmas cartoon. I can’t say for sure, but I can say this:

Get the fuck out, now. 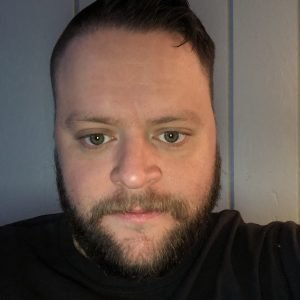 N.D. Coley currently serves as an instructor of English at the University of Pittsburgh at Greensburg, Community College of Allegheny County, and the University of Phoenix. In his spare time, he laments the human condition, reads satire and dark, depressing literature, plays with his son, irritates is wife, and tries to keep a smile on his face. His work has recently appeared in Near to the Knuckle, Deadlights Horror Fiction Magazine, the Indiana Voice Journal, Corner Bar Magazine, Massacre Magazine, and Funny in Five Hundred.