What’s in a last cigarette? Castille asked the question to himself as he slunked down on the balcony of the Rio Sands. He applied pressure to his abdomen, and leaked from the wound on the concrete. The sensation was like pissing on yourself, the dribbles tapering down his thigh.

Castille would have preferred something different coming to mind, but there he was, all out of final questions. A closing smoke is like a last rite, a courtesy granted by pros. The ones he gave out were usually clasped in bloodied lips. He hated the prolonged drags, as if there were a choice in the way things were ending. Inhaling with a purpose never stopped the hammer from dropping, and he left them with two slugs in the chest for the effort.

Castille kicked his habit years ago, and his body moved on to different vices in the interim. The one that did him in was holding a pistol to her side. Dark hair sleeked from the shower, droplets cascading down the cheeks of the Holy Mother tattooed on her forearm.

Clothes were tossed on the floor and framed the room in casual sex. The little chicana girl stood by the discarded dress, completely comfortable with Castille viewing her shapely form. He turned away and watched over the city through the railing.

She came out with two cigarettes between her fingers. The paper had crinkled around the end where it had been packed, and she split the two apart in her teeth and lit them. The end of the spare cigarette adhered to her lip and she drew it out slowly, offering it over.

“Try not to ash on yourself.”

The accent didn’t raise the near-open front vowels, and her tongue cluck dripped with seduction. She hadn’t finished one sentence at his door before he pulled her through.

“You want to take a moment to bleed out then?”

She thought on this momentarily.

“I gave it up a awhile back. Takes away years.”

“None that you should worry about.”

“Let me ask you something.”

“You’re in my position. What do you ask for?”

Castille coughs and spits in the pooling blood.

“There’s a hospital upstate has a little balcony looking over the city like this. It’s set up so terminal patients can have a smoke and drink.”

“Give them some dignity before they die.”

“A belly full of jello, fighting a lost cause, and their idea of dignified is a cigarette.”

“Fuck, you could just kill me.”

She tapped the cigarette into the breeze.

“What would you want?”

“Lot’s of lasts. Probably wouldn’t have gotten drive thru.”

A slight grin crossed his face.

“I saw a woman once, much older than you. The years showed but it didn’t affect her any. We were in line at the bank and she was disputing something with the teller. He brought in the manager and things got heated. They were quick to blow her off. I remember she had this moment of defiance where she took out a cigarette and lit up right in their faces. The way she left… That was memorable. Her walking away.”

“So you want the woman?”

“No, I just appreciated the way she left, like everyone was lesser for letting her out of the room.”

She paused and raised the cigarette back to her mouth. The ember brightened; her chest rose and she exhaled through her nostrils. The smoky wisps twirled and dissipated from the light. She swivelled on her toes and trotted away. His last memory was a flick of the wrist where she ashed on the floor and the muzzle discharge. A gust silenced the sound from the street and carried away the whiff of sulfur from  the air. 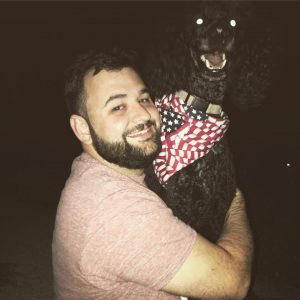 Zach Stanfield lives and writes in Huntsville, Alabama. When not writing, he is usually a stones throw from his wife and dog. This is his first published work of fiction.