The train was late, but then it always was. When she got off the train, I was surprised a little, but then I always was too. She walked out of the station with her head held high, with a purpose in her step. How did she do that? How could she do that? What drove her, day after day after day, to get off that train and walk up that hill?

Even though I knew where she was going, I still followed her. This was an easy babysitting job, going on three months now. But it was a strange one too. Follow her to the station and follow her back from the station and watch her all night, like she was some rich man’s mistress, some rich man’s wife. But she was neither. She was married to a lousy county detective, and she took the train into the city for some lady job, a secretary or bookkeeper or some kind of bullshit. The cop husband was a goon and a drunk. A dirty cop through and through.

The seasons had changed and now a chill was in the air. The leaves had turned their colors and were getting ready for the big drop. The smell of wood smoke surrounded the neighborhood. On any other block I would have said it was going to be a nice evening. But not on this one.

Even though this was an easy babysitting job, it was rotten. It paid well, good money, hell, very good money. But now I hated every stinking dime. Every night it tore me up a little more. I wanted it to end. I was told it would, but it hadn’t and I didn’t think it ever would. I knew I would take myself off the case, just like the last guy, McCluskey, the poor bastard, and the guy before that, whoever he was. There was probably a guy before that too for all I knew. Hell, maybe there was a whole string of guys who got sick of this no-good job.

But then, maybe tonight it would happen. Maybe. But who am I fooling? Just myself I guess.

I kept walking and got into my car across the street, also fading blue and sat on my weary ass. And sat, and then I sat some more. I ate the sandwich I packed an old lunch box and drank the coffee I kept in a battered old thermos.

He was late tonight. The lout cop husband had been drinking and a little after ten o’clock he finally got himself drunk and started in on her. First with the yelling and the shoving and the hair-pulling. Then came the slapping and the punching and the kicking. How the hell could she take it night after night after goddamned night?

On this block, the neighbors all closed their blinds and their windows after dinner. They don’t see or hear nothing these people. I can’t blame them.  Who wants to get involved with a drunk cop beating on his wife?

A little after eleven, he finally wore himself out or maybe he passed out, and the street was quiet again.

Ten minutes later it happened. Two sharp cracks. Sounded like a cop .38 to me. His cop .38. I started the car. After a few minutes she came out of the house. A small suitcase in one hand, jacket over the other, and she started back down the street towards the station. She was limping.

I pulled up next to her and flung the passenger door open.

She turned suddenly, then gave me a funny look, then smiled, then threw her suitcase into the back seat and got into the car. 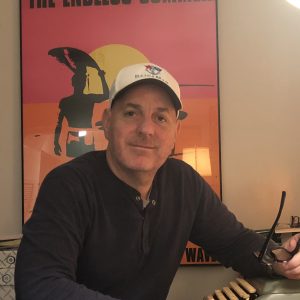 Over the years, John has worked as a truck driver, gas station attendant, private investigator, small-time publisher, litigation associate at an international law firm, and currently, as an enforcement attorney at financial industry regulator.

He lives just outside New York City with his family and is working on a novel about a science fiction author who tries to find a missing heiress in 1966 Los Angeles.