I rode the E downtown to the WTC or Freedom Tower or whatever. My junk man worked a legitimate gig nearby. He’d meet me in an hour with the stuff. Till then, the Tower’s needle would shine on as sure as my spiders crawled.

The train slowed at Fourth Street.

Through graffiti scratched windows, I saw a mirage that owned a face that could launch a thousand ships. In she clomped on three inch heels. Gold-rimmed Aviators surveyed the real estate and dropped her body beside mine. We both watched her ghostly reflection in the window across the aisle.

She pouted. Her ghost mimicked it back perfectly.

She tussled her hair into different styles. Then suddenly, as if we’d known each other forever, this Helen of Troy turned to me and smiled with teeth like God’s shoeshine. “Does it look better like this,” moving her hand slightly, “Or this?”

She must’ve seen me watching. Sweat leaked from my temples. My withdrawal distorted back at me in her Ray-Bans. Before I could answer, the E screeched to another halt. We collided slightly. Her warmth against me felt pleasantly inconvenient. I didn’t notice the doors open but Helen’s breath hitched.

A blur of blue wool lurched onto the train. His booze reddened eyes met hers and squeezed to points. This Postman bellowed, “Gooooddaaaaamn!”

Shock froze Helen’s face as this delivery toad hopped towards us, “Hey,” he pursed his lips.

Disgusted, Helen of Troy turned away. He pressed on undeterred, “You know the postman always rings twice…and baby…I’ve got a special package. Big enough they charged freight.”

The Postman reached for her bare knee. Before I realized it–his meaty wrist rested between my cold fingers.

The Postman’s eyes widened, “Let go of my arm!”

I wanted too–I really did, but…

The mail satchel swung. Instinctively I ducked. I heard a loud WHOMP as the bag exploded against Helen’s face, blasting paper shrapnel everywhere. Helen collapsed on impact. Like a real bomb, one second she’s there and then…

Things grew dark. My arms–no strength. With the Postman throttling me, I grabbed for his big red nose. He hollered and punched me in mine. Tiny stars burst all around. He swung again. More fireworks.

The Postman stood. His boot cocked. Murder raged his face.  I braced for impact.

Suddenly, a cacophony of noise as the train braked.

The Postman’s leg goes full Rockette before he folded backwards like a marionette. He never saw it coming. His expression unchanged as he crashed against the hand-pole. He hung there briefly before Newton’s Law slumped him to the floor.

The doors part and I’m on my feet to find everyone’s made the exits. It’s just me, the Postman and Helen’s sunglasses.

I hustled to the platform. Caught the tail of the lemmings climbing the stairs. I fell right in.

Frantically, I know she’s already gone. I breached to street level. This subway exit shared a sidewalk with a cemetery across from a building shaped like dinosaur bones. I scan around the modern fossil–but find no Helen.

Without her Ray-Ban’s would I even know her?

My nose leaked blood and I dunno if it’s my evil habit or the goddamn Postman.

Under the shadow of the Tower, I found a place to wait–off the main path, a less toured fountain ringed with memorials. It sloped towards a drain below a hollowed, multi-circled globe.

I sat and slipped on Helen’s Aviators. Everything glowed pink behind her lenses, but it didn’t fix nothing.

I wanted something to hurt as bad as me.

A Hindi grandmother’s colorful robe caught my eye–coaxing a toddler from under the fountain. This little guy wore red overalls darkened with wet. Every time she drew close he scampered away. Laughing at the little game they played. Then as if ordained—the Big Apple took a bite out of him.

Above everyone, the Tower’s needle shined on. 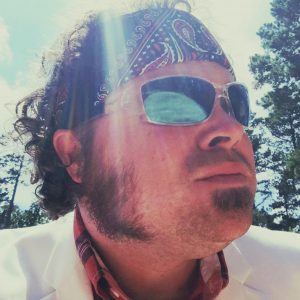 J.D. Graves is an author and playwright who lives in East Texas with his wife and kids. His play Tall Pines Lodge was an official selection of the 2016 New York International Fringe Festival as well as the 2007 FronteraFEST. His short work can be found or is forthcoming in, Pulp Modern: Tech Noir, Mystery Weekly, Black Mask, Tough, Switchblade, etc. He currently serves as the Editor-in-Chief of EconoClash Review and is writing his first novel