The crunch of car tyres on gravel signals Wheeler’s arrival home. Headlights flash through the chiffon curtains as his huge four-wheel drive pulls into the carport.

The luminous beads on my watch say it’s after seven. I’ve been sitting in the darkness in Wheeler’s bedroom for an hour.

His house has given me a different insight into the man to the one I’d gleaned over two months, chasing him down corridors and on the phone for information. Any information.

The furniture is all teak and leather, no cheap Ikea shit. That doesn’t surprise me. But the collection of Aboriginal artwork is news.

He also likes to travel. Happy snaps pepper the walls, him with the wife and kids on beaches and trekking through jungle. He’s just dropped the family at the airport. They’re on their way to Bali. He’s supposed to be joining them later.

He looks different in those pictures. Happy, engaged, human. Got to push those images from my mind, focus on the white-hot ball of anger in the pit of my stomach.

The front door opens. I hear keys thrown onto the hallway table, footsteps on the polished wooden floorboards.

The bedroom door opens. I flick on the bedside lamp. Soft light floods the room. Wheeler blinks, otherwise cool as, like he walks into his bedroom everyday and finds a man pointing a pistol at him.

The little bastard gazes at me, sniffs like he’s trying to find the source of a bad odour.

Right now I hate him more than anyone living being on earth but he’s struggling to recognise me.

I squeeze the trigger, just as he opens his mouth to speak. The tranquiliser gun makes a noise like a sharp intake of breath.

Wheeler swats at the dart like it’s an annoying insect. Then his eyes disappear into the back of his head and he slumps to the ground, doesn’t move.

I look at the gun. Amazing, the shit you can buy on the Internet.

The next part won’t be so easy. I take a deep breath, hold him under both arms, drag him down the hallway to his car and a date with a nearby ravine.

At night the hospital feels like the empty hotel lobby. The woman at reception smiles, looks back to her magazine.

The duty station in the oncology unit is unattended. The rooms either side of the carpeted passageway are mostly dark and still, although I notice the occasional relative or loved one in their bedside vigil.

Room twelve on the left. Dad’s hand is cool, the skin like tissue paper. His eyes are closed. The condensation on the clear plastic of his breath apparatus, the only indicator there’s any life left.

I touch his check with the back of my hand.

Eleven weeks since he was diagnosed, but already he’s a husk. The chemotherapy administered by Doctor Wheeler destroyed his health before the cancer had a chance to do its work.

I can still remember Wheeler’s mogadon voice telling me one can never know what will happen with treatment, that it’s all guess work.

The image of Wheeler’s burning car loops in my mind.

The curtains are open. Lights dot the hills. Music plays faintly from a speaker above the bed, one of those dreadful stations old people listen to. The nurse tells me he likes it.

I’ll deal with the moral consequences later. Add them to the mountain of guilt I feel for letting Wheeler convince me chemo was the way to go.

For now, better to focus on the old man in the bed next to me, think of what I’ve just done as a form of trauma therapy.

A nurse pops her head into the room, the tiny brunette always on duty this time of night.

‘Doctor Wheeler’s left for the night but he’ll be back in the morning.’ 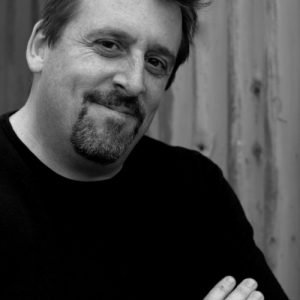 Andrew Nette is a crime writer, book and film reviewer, and pulp scholar. He is one of the founders of Crime Factory Publications a small press specialising in crime fiction. His short fiction has appeared in a number of print and on-line publications. His first novel, Ghost Money, was published in 2012.