The rumbling of the train over uneven tracks jostled Ray awake.

The first thing he noticed was the headache pulsing behind his eyes. The second thing was the pool of blood spreading across the floor, soaking into the cardboard boxes stacked around the car.

Two of the other stowaways aboard were fighting, clawing and biting and hissing at each other. A third companion — an old-school rambler with whom Ray had crossed paths more than once, the kind of train-hopper with more tall tales than teeth in his head — lay slumped over, a switchblade sticking out of his gut.

“Holy shit.” Ray gripped the neck of his guitar beside him. “Which one of you fuckers killed Roadie?”

“He did!” they both exclaimed.

“So both of you.”
“No, him!” they both insisted, continuing to scrap.

Both were dirty, desperate, drug-addled, and wild-eyed. Ray wasn’t passing judgement — so was he, after all. But he’d never stabbed an old man in the stomach. One of these fellers did.

“He’s crazy!” said the one, methamphetamine pockmarks dotting his face like craters.

“He wanted ‘is drugs!” said the other, most of his face obscured by a bushy beard that hadn’t seen shampoo in all its miserable life. “Roadie said no ‘n’ he fuckin’ stabbed ‘im!”

Only one of those seemed like a real motive to Ray. Roadie, for all his hospitality when it came to sharing meals and stories, was notoriously stingy on the railroad circuit when it came to the subject of substances. And hadn’t the pockmarked tramp been cleaning his nails with a switchblade before Ray passed out? That would make both motive, and means.

He picked up his guitar.

“Life’s a lot like hoppin’ trains,” Roadie had once remarked to Ray, years back. “Rich folks decided which way things was goin’ long before you or I got on.”

That had always made a lot of sense to Ray. He wondered what Roadie would’ve had to say if he knew how he was going to die.

Ray swung the guitar at the back of the pockmarked tramp’s head. The sound of discordant strings reverberated through the car as he collapsed, unconscious, to the floor.

“Thanks,” said the bearded man. “Thought I was next.”

Ray regarded his guitar, now splintered and shattered. He sighed heavily, then slid open the heavy door. The countryside whipped by at twenty-five outside.

“Come on,” Ray said, abandoning the broken instrument. “Let ‘em sort this out at the next stop.”

They both leapt from the train, tucking and rolling down the dandelion-dappled hillside. Ray watched the train disappear down the tracks, carrying Roadie’s body to the end of the line, that final train station in the sky where all ramblers are someday destined to make their eternal departure.

“See you there someday,” Ray muttered, more to himself than to Roadie. “Someday soon, seems more ‘n’ more like…” As the locomotive vanished into the wastelands, Ray turned to the highway, his thumb extended to the oncoming traffic, marching onward into the setting sun that glowed like dried blood smeared across the sky. 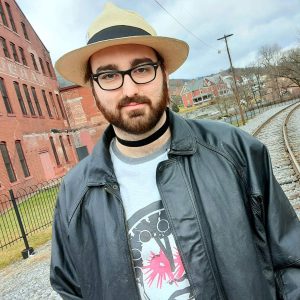