Too Good to Be True

Michael slapped the scuffed, silver-grey briefcase against their dining room table. He ran a hand through his dark, stringy hair and shot Javier a look of cold and utter certainty.

Javier stepped forward, set in the combo Sammy gave them and popped the locks. The lid flew back with a satisfying snap, revealing rows of Andrew Jacksons, in thick symmetrical piles, pressed together with greasy rubber bands.

Even though Javier had seen the contents back at the empty lot where they made the deal, seeing those tiny faces stare up at him a second time that day made it easier to swallow. All morning, he felt it was too good to be true and had been nervous as hell. After all, it had been the most lucrative deal he and Mike ever made. They managed to move the whole crop in a single afternoon. Sammy had even delivered them a message from the big man himself.

“Compliments, from Kurt,” he smiled with a gleaming mouth full of silver, before driving off in a cloud of dust.

“Start dividing,” Michael shot a finger to the case. “Gonna put on a new shirt. This one’s sweaty as hell.” He jogged upstairs, leaving Javier alone with the case.

For a full moment, Javier stood there transfixed on their newfound fortunes.

It called for a celebration.

He walked into their kitchenette, popped open the freezer and pulled out the bottle of Russian Prince squeezed in between the pizza pockets and hamburger meat. He poured himself a tall shot, and knocked it back in one sip, revelling in the glorious burn from deep inside his chest.

He was about to pour himself another one when he felt pocket vibrate. Unknown caller. He put his phone to his ear and waited for the voice.

His chest sank and a bead of sweat ran down his back. He worried about the deal, but pressed on as cool as he could.

“Mike’s going to kill you.”

“Kurt doesn’t like dealing with two middle men, so he made Mike a new deal.

“Serious. He’s gonna pop you one. You still got that old revolver?”

“Upstairs, in the study.”

“Off him first. Kurt will be just as happy to deal with you as Mike.”

The phone clicked in his ear. Javier felt at a total loss. He didn’t want to believe what he just heard. It felt too unreal, like a dream.

Then again, everything that had happened that day felt like a dream.

He pulled a slender santoku knife from the drawer and went upstairs. He moved silently atop he carpeted floor and peeked into Mike’s room, but it was empty.

That’s when he noticed the door to the study was ajar.

He crept closer, clenching the knife. There was music playing from within. Mumford and Sons.

Javier relaxed. That wasn’t the kind of music you put on when you were about to double cross your best friend, was it? Hi sighed. Sammy was playing him. Trying to turn him against Mike when they needed each other more than ever.

He dropped the knife. The cold, sharpened steel hit the floor with a soft thud, no louder than a footstep. He pushed the door open and stepped inside the study.

“Hey Mikey, listen, I think we might have a prob…”

Mike stood there, shirtless, waiting for him. In one hand was his cell; in the other, the revolver pressed flat against his leg.

“Sammy told me everything.” Mike’s voice was shrill, wounded.

“Wait!” Javier raised his hand in sudden protest. But he moved too quickly.

Michael’s body twitched. The revolver jumped up to eye level. It only took a momentary squeeze. The kickback was deafening. Javier hardly noticed. The burning feeling, from deep inside his chest, became his whole world. And then regret. And then the dark. 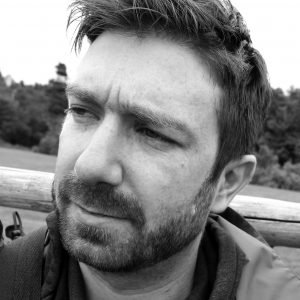