Orville placed a hand on the glass wall between them. They once talked like this at the kitchen table, almost nose to nose, the boy waving dirty cash and pleading with Orville to remember the good times.

Even then, something separated them. Death Row simply gave it form.

“I guess you’ll order whatever,” Orville said. “Remember that cruise? You had Beef Wellington and that cherry stuff they set a-fire.”

The boy’s dainty fingers held the phone. “It doesn’t work like that, Orv. You pick from the 28-day menu cycle. I’m thinking fried chicken and tots. Anyway, it isn’t my last meal.”

“My last meal is three drugs. Midazolam relaxes you. The last one is potassium chloride, stops the heart. Not sure about the middle one, but I doubt it’s good for me.”

Orville clenched back tears.  “Why even think about that?”

Orville sobbed and it came out like a laugh. “They gonna let you sample them drugs first, make sure they taste OK?”

“Maybe I’ll send them back to the kitchen, say they’re not done.”

Pedro laughed and Orville listened hard, burning that sound into his brain. The Alzheimer’s had kicked into high gear after the boy went behind bars. Companionship slows the brain rot. Now what? Get a fucking poodle?

“We had a run, didn’t we? I drank good bourbon from the deep pockets of stolen names. We did that cruise. You still got that GPS tracker I bought?”

The boy loved his gadgets, not that a tracker would help now. If Orville wandered off, no one would follow.

“Remember to take your Aricept,” Pedro said.  “And that anti-rage stuff.”

Orville growled like a bear and the boy laughed. Two laughs made it a good day.

“Fucking questions. Yes, Danielle’s doing it. She keeps asking about that night.”

“Calm down. Her name is Donna. Tell her you don’t remember. It was the state fair. It was months ago.”

But he remembered everything, this for a man whose superpower was forgetting. He and Pedro were working their scheme at the food truck. Orville would swipe a credit card, drop it on the floor and swipe it on a second reader to get the information. Pedro would do the rest later. He’d sell the stolen data to a broker and return to the house with cash, all full of Moxie.

But halfway through the night, a confused Orville tried to return a credit card and handed over the portable reader instead.

The customer connected the dots. A hand shot through the window and broke Orv’s nose. Pedro pulled the guy into the truck and dunked him in the deep fryer up to his neck tattoos. Then he found a paring knife and went to work. The funnel cake lady eventually broke it up, but not before the guy choked to death on French-fried lungs. There stood Pedro, powdered-sugar handprints across his back, holding a hank of hair with sticky scalp pieces, screaming about every bully who had beaten him up in high school. The funnel cake lady, a strapping Pennsylvania Dutch woman, sat on her haunches and wailed.

“I screwed up that night,” Orville said. “I can’t forget.

Pedro’s nose flattened against the glass. “Then make new memories. These executions get botched. The drugs don’t work. Peoples’ guts start heaving and their blood turns to fire. It’s a slow death.”

Faster than mine, Orville wanted to say.

“Let’s pull one last switcheroo.” The boy chin-pointed to the vending machine. Under the rules, visitors could put in money. The guard would remove the items and place them in a paper bag. The prisoner had to consume everything before returning to the cellblock.

He bought four packs of peanut butter cups, Pedro being the picky eater because of multiple food allergies, peanuts being the worst. The boy wolfed them down and placed his hand on the glass. Orville did the same. As the boy turned blue, Orville rejoiced in his quick death and imagined shaking hands with his only friend. 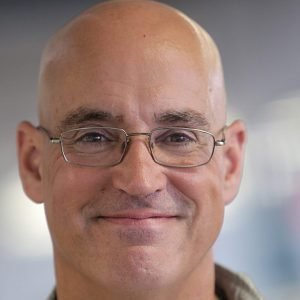 Hugh Lessig’s short stories have appeared in Thuglit, Crime Factory and Needle: A Magazine of Noir. A career newsman, he lives at Fort Monroe, Va., with his girlfriend, Shana, and two dogs, Roxie and Gus. “To Go” is his first published flash fiction