The sting of sweat hit my eyes as I spotted Mickey’s Lincoln in the parking lot of the Tiger Tail Lounge. Two giant neon tits welcomed me as I pulled in to park. The tits were wearing neon cowboy-hat pasties. Even in an outhouse of a town like Rockford, Illinois there were decency laws.

The lounge was quiet so I traded my gun for the pocketknife in my glove-box and headed into Tiger Tail. The bartender nodded as I walked through a beaded curtain that led from the foyer to the main lounge. There were fifteen tables and only two patrons; a man and a woman. The woman had a half-naked redneck on her lap with the fakest tits I’d ever seen. She looked uneasy but her boyfriend had a huge grin on his face.

The bartender gave me a grunt and nod. I reciprocated his brevity. “Mickey?” I asked. He grunted again and raised a finger towards a door. Someone had spray-painted Employees Only across the front. The words were crooked and runny as if the owner couldn’t afford stencils.

“Tommy!” I heard as I swung open the door. Mickey was leaning over a frosted mug of Heineken. Across from him was an old man I didn’t know. He looked nervous.

“How’d it go with that waitress?”

I pulled a Polaroid from my shirt pocket and laid it on the table. Mickey ran his eyes up and down her bruised body and shot me a grin. The old man stared at the photo nervously.

“Nice work.” he said and tossed me a bundle of c-notes. There was no need to count. Mickey was an asshole but he never cheated me.  “Now how’d you like to triple that?” he asked.

“Well ain’t that a bitch.” I said. “So he’ll be subject to the default interest rate?”

“I’ll give you the whole damn place.” Clifton points to the corner, “Got all the papers right over there in the safe.”

Mickey laughs. “I like titties but I don’t want no fuckin’ titty bar. ” Then more seriously, “Here’s the way it works. I give people money when they need it. They make monthly payments with interest. If they don’t pay on time, then I call someone like Tommy.”

“Put your hands flat on the table.” I said. He complied. Then I saw why this job paid triple. Clifton was missing a pinky and ring finger on his right hand. His payments must be huge. Otherwise Mickey would have wasted this old man.

“Seems losing a finger don’t bother Clifton here too much.” Mickey rubbed his chin with his forefinger and thumb for a moment, then he clicked and pointed. “I know. How bout this time we take his tongue?”

Clifton’s face drained. He quietly walked over to the safe and twisted in the combination. A few minutes later he dropped a giant wad of cash in Mickey’s lap and sat back down.

Mickey hops up, knocking over his chair, and in a flash he’s behind Clifton. He pins the old man’s hands to the table.

I whip out my steel Winchester pocket knife and get to work. The thumb is tougher than a pinky and I had to saw a little to get through the bone. Halfway through the old man passed out. That made the rest of the job easy and I handed the bloody digit over to Mickey.

“Nice doing business with you.” he says. I’m not sure if he’s talking to me or the old man so I just nod and smile.

Mickey and I leave the old man asleep in a pool of his own blood. Both of us leave Tiger Tail with more money than we entered with. Not a bad day in the Prairie State. 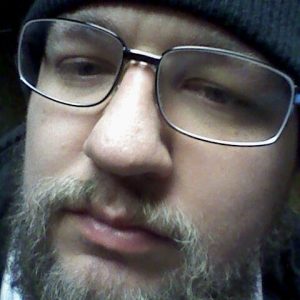 Dusty Wallace lives in the Appalachians of Virginia with his wife and two sons. He enjoys reading, writing, movies and the occasional fine cigar.
DustyOnMovies.com