I don’t mean to embarrass you, but you went cross-eyed there, just a second ago.

Really, it’s not for me to tell you this stuff, but I have to speak out while I can, because I get the feeling I’m not going to get much more than a glance after this, my big debut that, by definition, also happens to be my curtain call.

Yeah, I know, life isn’t fair. I got the memo. But is it too much to ask to get some acknowledgement, some kind of notice for my contribution? For who I am. For what I did. Isn’t that what we all want? Some affirmation?

I’d know you’d laugh (if you could) when I say: I’m not a nihilist. Yes, I’m aware of the irony. But just because it’s my nature to do what I did doesn’t mean I didn’t want to do it the best I could. Essence doesn’t preclude excellence. You understand? I don’t know who you were, but I bet you’ll want to be known for fulfilling the promise of who or what you could’ve been.

The proof of that is about to hit the floor.

But will I ever get an accolade for it? Of course not. You won’t care, even though, right now, I guarantee you I’m the most important thing in your life. And, despite the evidence in front of him, the other guy (his name is Maurice, by the way), won’t either. He’ll put it down to his hours of training or innate talent. Everyone who comes after—the half-drunk witness, the beat cop from the street, the souvlaki-fingered detective prying me out of the drywall—not one of them is going to give a single thought to the fact that I fulfilled the singular purpose of my existence with exquisite fidelity.

This is not okay.

For crissakes, the gun—a hunk of metal and plastic that couldn’t dent a baby’s head without my help—it got a goddamned name. It’s Peggy. That’s the gun’s name. Maurice named it Peggy. After his mother, I think.

Look, I know you won’t really appreciate this, but we’re not so very different, you and me. We both wanted to make the most of the time we were given. We’ll want people to think well of us, to remember who we were. But I’m not so sure that’s how it works.

Here’s what I mean.

You might be tempted to think of your present existence as the sum total of who you are and, in that sense, infinite, amiright? Your life, as it has been lived, is to you the whole enchilada. The epic saga. The beginning, the middle, and the end.

But, in reality, your life is actually just X years minus Y event (I’m your Y. You’re welcome.). Down here on Earth? The story’s over. Infinity cut short. And, in the lifetime of the universe, your entire eighteen, or forty-eight, or eighty-eight years is just a finger-snap.

Not so very long, is it?

Now you know how I feel.

That’s how long it took to go from being a twinkle in Maurice’s eye and a twitch of his sweaty index finger to a physical manifestation of your doom speeding through the chamber, down the barrel, and out the other end, birthed in an explosion of phosphorous and magnesium that would, in a blink, cross the intervening space and kiss the gas-charred skin of your forehead, instantly turning the question of who we are into who we were for both of us.

Maybe you were a gangbanger or an innocent bystander, an easy mark or the most powerful man in the world. Maybe you cured cancer or would’ve cleaned bathrooms until you died.

What you were doesn’t matter. What you did, does. At least, I hope so.

So, do you wonder what you’ve accomplished in this life? Have you made a difference? I hope you had that much. Because look, man…at the end of the day?

You? Me? The guy who shot you?

We’re all just passing through. 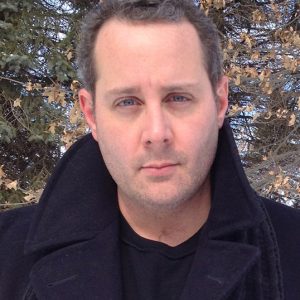 Matthew Iden is the author of a half-dozen books in the Marty Singer detective series and several acclaimed stand-alone novels, including the psychological thriller The Winter Over. He’s worked for the US Postal Service, an international nonprofit, the Forest Service in Sitka, Alaska, and the globe-spanning Semester at Sea program. His latest, Birthday Girl, features Elliott Nash, a homeless former forensic psychologist recruited to save a young girl from a serial kidnapper.