You always remember the sound the door makes the first time they throw you in a cell. All the other times, that shit just slams behind you and a voice in your head goes “Well, here we go again.”

For me, this makes it three. I did a sting at the LA County State Prison for aggravated robbery. I went in confused, came out a Sureño. Then I spent some time at Calipatria, again for aggravated robbery. Now I’m here, back in LA, wishing the asshole who came up with the three-strikes law would somehow end up as my cellie. Sadly, that’s not the case. The dude I’m stuck with is an old Sureño who keeps looking at me and licking his lips like a damn maniac. They always look at your tattoos and put you in the cage with animals of the same species, but that doesn’t mean you’re gonna get along. I think this is one of those times.

We go over the usual stuff. His side. My side. His space. My space. He gives me the top bunk. Bad knees, he claims while rubbing his tanned gut. There are two white sheets on the flower that we can hang up between the bed at the door to take sink baths when we get ripe or go on lockdown. Eventually, he sits down and keeps quiet until the silence between us is too big for this damn small cell.

I tell him. A small mistake. Boils down to this: make sure a corpse is a corpse before you leave it anywhere. Corpses don’t talk, but dudes left alive sing like magpies at a recital. They talk so hard you end up with attempted first-degree murder on your rap sheet and a life sentence on your shoulders.

The old dude’s mouth is frozen in a smirk I already hate as I tell my story. The only thing worse that the smirk is how he keep readjusting himself while making eye contact. Halfway through my tale, he starts shaking his head. When I’m done, he chuckles, talks.

“Listen up, young blood. I’m here because they ratted me out. You’re here because you got vago, carnal. Got lazy. You always check a body, make sure the muerto is bien muerto, hear me? When you beat the shit outta someone, you keep going until the hits don’t hurt ‘em no more. Skulls ain’t that hard after you crack ‘em a bit. I once did a gabacho in with a small rock ashtray. We was in his house, right? Posh hood, casa grande, nice TV, you name it. El cabrón walked in on us. I grabbed the ashtray from the little table in front of the TV and didn’t stop hitting him in the head till the thing was smashing the floor. Haha. What you did? That ain’t no small mistake, homie. I’m here because I got bad luck, cabrón; you’re here because you deserve to be.”

Under any other circumstances, the comment would’ve earned him a beating. Not here. The years ahead of me had already invaded my blood with their sour possibilities. I had my three strikes already. I was done for. All I’d get from now on would be time in ad seg, and that always means a cell to yourself.

Being slow in prison is not an option, and he learns that quick. A hook to the gut beds him over. A knee to the face keeps him quiet. His teeth hurt, but I know his mouth and nose hurt more. His body hits the wall without him raising his head. I push the back of his head down. He’s smart enough to curl into a ball. He’s expecting me to punch him, kick him. I don’t. I jump and bring my right foot down on the back of his head. There’s a loud crack. I kneel, grab his noggin, and start pounding it against the floor. He was right about skulls not being that hard after they crack. I’m right about corpses not talking, so I’m gonna make sure he keeps his creepy mouth shut. 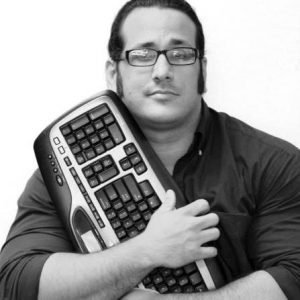 Gabino Iglesias is a writer, journalist, and book reviewer living in Austin, TX. His last novel, ZERO SAINTS, was optioned for film, translated and published in Spain, and nominated to the Wonderland Book Award. His reviews have appeared in Electric Literature, The Rumpus, The Brooklyn Rail, PANK Magazine, 3AM Magazine, Marginalia, The Collagist, Heavy Feather Review, Crimespree, Out of the Gutter, Vol. 1 Brooklyn, HorrorTalk, Verbicide, Criminal Element, and many other print and online venues. He is a literary columnist for LitReactor and CLASH Media as well as the book reviews editor for PANK Magazine and the television/movies editor for Entropy Magazine.