The girl had been shot, stabbed, poisoned and garroted, so the M.E. was not so much searching for cause of death as placing the wealth of possibilities in chronological order.

My initial canvassing at the exclusive women’s college where Millicent LeVoisant’s body had been found in the bed of her private dorm room turned up persons of interest by the dozen, a preponderance of them falling somewhere along the Kayleigh/Kylie/Kelsey/Chelsea spectrum, and I needed to note some differentiating feature of each to keep them straight in my mind.

The deceased had been universally despised, but her father was a powerful billionaire whose largess had built several of those halls of academia, so her dormies were afraid to report her or retaliate against the vicious, abusive bully who routinely posted vile tweets about anyone unlucky enough to make her list du merde.  I’ve read profiles describing the Bitch of Buchenwald in less pejorative terms than the ones used by those refined daughters of society’s elite.  Up to my bloodshots in suspects who had capital M motive, my challenge was to ferret out who had ovaries enough to send Miss Thing to the hereafter.

Once Dr. Bellamy had completed the autopsy, I visited him in the morgue.

“Okay, antifreeze in the stomach contents matches what I found in a bottle of Gatorade from her fridge, so that’s probably what killed her.”

“You can’t do better than probably?”

“Look, Detective, depending on how much of the stuff she drank before going to bed, and how much time passed before the second attack, she may have died before the person with the garrote slipped in and strangled her.  Or not.”

He went on to opine that the shooter came next, point-blanking Millie in the chest.

“Since she was categorically dead by then, the gunshot would not have produced much blood for the next perp—the one with the knife—to see in the dark room, so the three stabs to the heart were what you might call overkill.”

Of the four participants, the doc said, the shooter and stabber could only be charged with desecrating a corpse, while a jury would have to flip a coin between the poisoner and the strangler.

I had a different take on the crime.  No way were four of the overprivileged airheads at that rich-girls’ school capable of choreographing the French-farce logistics of enter-kill-exit throughout the night of Millie’s demises, and it strained credulity to think they had all independently chosen the same window of opportunity to exact their revenge.  I theorized a single perpetrator trying to spread suspicion among Ms. LeVoisant’s many targets, so I reinterviewed them individually, this time in the dead girl’s own dorm room.

The laced Gatorade had been taken away as evidence, but I brought a replacement, pouring half of the neon-bright liquid down the toilet before placing the bottle in the tiny refrigerator.  Ten minutes into each interview I feigned thirst, pulled the sports chug from the fridge and filled a large glass.  Then I carefully observed the co-ed as I pretended to take a drink.

The seventeenth interviewee, Kayla Paulson, was a full-scholarship brainiac.  I already knew from the others that she had been tormented relentlessly by Millie, mostly because she was what the bully judged “poor, white trash,” but also for being so grossly overweight she could barely squeeze into a size four.

Kayla was the first girl to show alarm when I retrieved the day-glow beverage and poured a tall one.

“No!” she cried out, knocking the glass from my hand before it could reach my lips.

Behind the grate of an air vent in Kayla’s room, we found the garrote cord, the butcher knife, a .38 with a silencer, and a half-empty bottle of antifreeze.  Or maybe it was half-full.  I tend to be a bit of a pessimist. 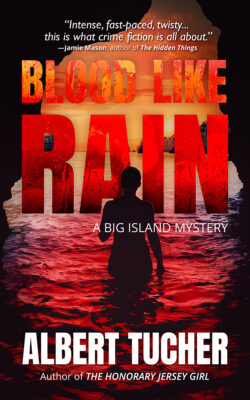