You spend your life trying to preserve it. Watch the streetlights; don’t walk until the little man illuminates—don’t even risk it come the blinking orange hand. Or, driving: you can turn right on red, but then you’re risking possible miscalculation, some clown texting his mistress and you introduce yourself through his windshield. You wear a helmet for beer league softball, even though the beer-swigging blue-collar boys lob endless insults, questioning your sexual preference. That hamburger’s starting to gray, and it’s been five days? Throw it out and never think of it again.

You do these things, check them off, feel better. But when you’re on the shitter in an I-90 truck stop in western South Dakota listening to a murder being committed, all the caution you’ve exhibited your entire life was for naught. A series of pointless exercises. You’re on the clock now, as they say.

But you weren’t the one on the shitter. It was me. I.

I sat there, analyzing a haiku from a roadside poet etched in knife on the stall wall when the animal call of violence filled the room like a sudden hailstorm. My bowels, so relaxed only seconds earlier, tensed considerably. The accosted sobbed between dense thuds of fists, sharp slaps, and suddenly, the chemical hissing of a silenced pistol. Then there came a void, a void soon filled by stillness. And by stench: shit, smoked bone and flesh.

I held my breath subconsciously. The silence built, then shattered. Footsteps. The sound of a body being dragged (into the handicap stall, I presumed). Then the door to the stall shut, and the footsteps clicked my way. Snakeskin cowboy boots. The toes of them pointed at me underneath the stalldoor like two equally accusatory fingers.

“Go ahead and finish what you were doing,” the voice came. “Then we can talk.”

You’re thinking: Why didn’t this dumbass just lift his feet, raise them high off the tile, so the guy didn’t know he was in there? Well, the answer: This ain’t no movie, Sweetheart. Shock has a specific effect on the nervous system, and oftentimes, it freezes the territory of your brain tasked with forming intelligent decisions.

After a moment I said: “We can talk now.”

“So long as you’re focused.”

I asked the most immediate question. “Are you going to kill me?”

“I haven’t decided that yet,” the reply came.

His tenor was too relaxed. He’d just been in that ultimate struggle, to save or end life, and here he was, not even breathing hard.

“What’s it dependent upon?” I said.

“You got your driver’s license with you?”

It sounded like his head was pressed against the door. His voice vibrated the stall.

“Slip it under the door.”

I reached down into the pool of denim and plucked my wallet from my back pocket and sent the entire thing spinning like a twig on ice toward the snakeskins. The man bent down. A white guy’s hand. Olive skin. Or maybe just tanned.

“Because you know, if you’re lying, it takes about five minutes to find your forwarding address.”

I heard numbers being punched into a cell phone. Then his voice: “Say, Rich? Yeah, write down this name and address.”

He gave Rich my name and address, both of which really were current.

“If I get fingered, go to the address and kill this guy. And hill whoever else is present. Thanks.”

A beep and the conversation ended.

“I just talked to Rich.”

“You know what he’s going to do to you?”

“That’s right. You enjoy the rest of your night. Drive safe. The deer are thick this time of year.”

He sent the wallet skittering back across the tile and took five steps to the door. The heavy settling of silence. Silence and stench and the knowledge your life, a life carefully managed, safety prioritized above all, has now changed, and you’ll never believe in control again.

You laugh. Go ahead. Laugh. 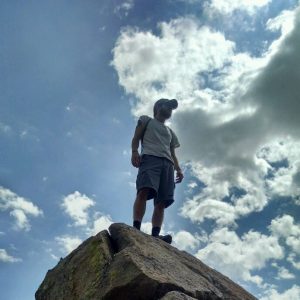 Nick Heeb is a native of western South Dakota. His work has appeared in the South Dakota Review, BULL: Men's Fiction, and elsewhere. His first novel, The Lucky Clover, will be published next fall by Shotgun Honey. He is an MFA candidate at Bowling Green State University and was recently named a Devine Fellow. 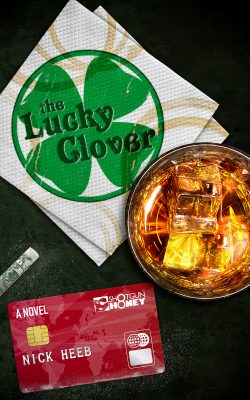