Greer was pissed.  The space inside the cake was too tight for him.  His legs were going to fall asleep if he didn’t get out soon.

He wondered how strippers did this.  He squatted inside the wooden cake shell, his hands clutching the pistols.  Of course, Greer was six foot five and well over two hundred and thirty pounds.  He debated getting out and forgetting the whole thing.  He couldn’t breathe in the confined space and sweat ran down his back, a sensation he truly hated.  His boss, Old Abe, did not pay him enough for this shit.

Finally. Greer let out a deep sigh and grabbed the inside of the shell to keep his balance as it lurched forward on its casters.  Crap, he thought, this was a stupid idea.  One of the pistols tumbled out of his hand, lodging between his knee and the inside wall of the shell, digging into his thigh.  Greer ignored the pain and closed his eyes.

The music grew louder as he felt himself rolled into the banquet room.  He heard the jeers and catcalls of the men at the party.  Greer grabbed the pistol when the cake stopped moving.  He smiled as the music began to change into a loud offkey rendition of “Happy Birthday.”  This was a birthday surprise Tony and his boys would not forget.

He waited until the song died down and the catcalls resumed, then shot straight up.  He ignored the pops in his knees as his head broke through the paper cap on the top of the cake shell.  Over a dozen half-drunk men stood around the cake, their looks of lust changing to fear as they realized it was not a stripper popping out of the cake.

“Greer!”  Tony, the birthday boy, yelled, his eyes wide with terror.  He stood at the front of the group.

“Happy Birthday, Tony!”  Greer rasped.  His lips pulled back in a twisted grimace.  Greer raised the pistols and squeezed the triggers.

Greer emptied the water pistols on to Tony as the men behind him began to laugh.  A few not in on the gag just stared.  Tony cringed for a moment until he realized what happened.  He sat in a puddle of water, his jaw hanging and his eyes wide in disbelief.

His eyes settled on Greer.  “You son of a bitch!”

More laughte4r quickly erupted.  A couple of the guys helped Tony up.  Greer stood there in the cake, shoulders quivering as he struggled to control himself..  Tony glared at him for a few seconds, then his face broke into a smile.  He began to laugh with the others.

Greer waited till the laughter ended and raised his hands.  “Boys, there is more fun across the hall.  The girls are waiting!”

Greer stood in the cake shell as the others filed out and then called Tony.  “Hey!  Come help me out of this thing.”

“Christ you ape!  I thought for a second Old Abe sent you to finish me off!”

Greer clutched Tony’s arm as he climbed out of the cake.  As he landed on his feet, he pulled Tony against him.  Tony gasped as Greer’s blade slid between his ribs.  He pounded against Greer’s chest a moment, and then went limp.

Greer picked Tony up as if he weighed nothing and tossed him into the cake shell.  Trevino, a small grey-haired man in a tan suit came in from the side door.  Without a word, he pushed the shell out the door.

Greer walked over to the other banquet room.  He wanted to be sure no one saw what happened.  The boys had heard nothing, cheering two topless blondes dancing to an old seventies tune.  One of the party goers saw Greer heading for the exit.

Greer turned and looked over his shoulder.  “He is checking out dessert.” 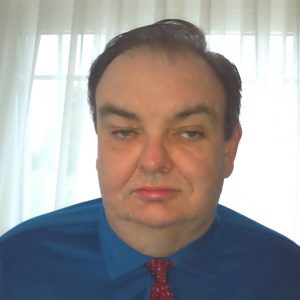 Steven James Cordin is a native of the Chicago South Suburbs.  Steve has worked in banking as a repo man, foreclosure guru and fraud investigator. He writes about fraud. crime and horror fiction.  His stories have appeared in Shotgun Honey, Mystery Tribune and The Yard: Crime Blog.  Steve is currently working on a collection of crime fiction short stories.