“Eighteen! Thirty-four! ‘Levendy-twelve!” Brucie shouted, following it with his irritating high-pitched giggle. Like he thought trying to mess Doc’s count up was the funniest thing since Chris Rock.

Doc ignored him and kept counting and dividing the bundles of cash. The other three of us glanced at each other and rolled our eyes at Brucie’s actions.

Brucie was a problem, but Doc said we needed five guys for the armored car job, and Tone vouched for Brucie. Said he was good with his fists and a decent shot. But he was also a pain in the ass from the jump. On everybody’s last nerve when we were together and causing us ten kinds of grief when he was acting on his own.

No thanks to Brucie the job was a success and we made it to our rendezvous at the warehouse without any major screw-ups. Now, to let Doc to finish counting and make the split so we could part ways with Brucie.

“Jeez Doc, you count slower than my four-year-old nephew,” Brucie said, pacing back and forth and practicing his quick-draw while gunning down imaginary cops with his chrome-plated revolver. The fact that Brucie hadn’t accidentally blown somebody away before now was miracle, the way he liked to wave his gun around.

Doc paused from the count and shot the rest of us a look that signaled his patience with Brucie was wearing thin. See, the thing Brucie never understood was that Doc was the lead dog on this sled team. Doc was the brains and we all did what he said. He didn’t talk a lot, or get loud, and because he was quiet Brucie treated Doc like he was weak and stupid. He was neither.

“Hey Brucie,” Tone said. “Why don’t you give it a rest? And maybe put that gun down.

Brucie shrugged and sat back down at the table with us.

“Sure, no problem,” he said, putting his gun on the table in front of him.

We watched as Doc continued to count and divide, but Brucie was like a big hyperactive kid. Couldn’t sit still for longer than a few seconds.

“I don’t understand what’s so hard about dividing some cash up five ways,” Brucie whined. “What’s the problem, Doc? Did you never learn to divide by five back in fourth grade? I guess it’s a good thing there aren’t six of us. We’d be here all week!”

That obnoxious giggle again as Doc paused his count and set the bundle of cash down.

Doc reached over and picked up Brucie’s gun and pointed it at the tin ceiling of the warehouse.

“I know that there are six chambers in the cylinder. And, each one holds a bullet.”

Everybody except Doc flinched as the deafening shot echoed through the empty warehouse and a single pinpoint of light fell on the makeshift counting table.

“There’s one,” Doc said, grinning at Brucie who just sat there with his mouth hanging open.

“Four.” The tabletop was dotted with pinpoints of light.

Doc quickly lowered the revolver and leveled it at at Brucie’s face.

“And six,” Doc said, putting the pistol back down on the table and picking up the stack of cash he had been counting. He smiled and glanced around at the rest of us as the echoing gunshots faded.

“I guess he was right. I do have a problem dividing by five.” 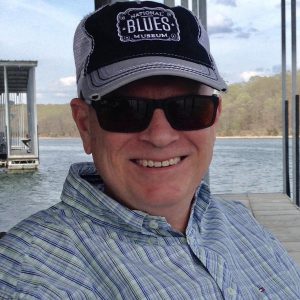 Mark Cotton spent most of his life in southeastern New Mexico and is the author of two mystery novels,Two Bits Four Bits and Twice the Heist, both set in the oil fields of west Texas. He lives with his wife and two cats on Lake of the Ozarks in Missouri, where he is currently working on his next novel. He also has a story forthcoming in Yellow Mama.