Chuckie was the new guy. He hated that we were calling him that, but since the boss was named Charlie, we had to call him something else. The fact that he hated ‘Chuckie’ kind of cursed him and it stuck. It stuck until the picnic last year.

Charlie, the Boss, didn’t let us carry guns when his kids were around. That was the big issue that made us nervous. Charlie had called in some hits on dealers he didn’t like, and new guy Chuckie had chucked his lead like an old pro. He didn’t puke afterwards or nothing. A clean job.

I was stuffing a heap of coleslaw into my dumb face when the salad bowl started dancing. Then the plate of dogs. And the mustard bottle exploded. Then I heard the bullets chopping through the air. Then we were all under the table.

Charlie was yelling orders, but what could we do? He had us all patted down when we walked through the front fucking door. Where were the guards?

I could tell by the grouping of shots that there were three shooters pinning us down. Charlie already caught one in the neck, but it was just a graze. Amateurs. Ridgie had already tied off his shirt sleeve on his bloody arm, and I swear, that crazy fucker was smiling.

We tucked up our knees and Ridgie joked, “Who pissed off the three blind mice?” We laughed, and that’s when I felt a cold bite on my foot. I plugged the hole in my sneaker with a wad of napkin and tightened my shoelaces. What else could I do?

He went for a piss. He had said that’s where he was going, anyway. And it’s those shitty moments where you say, ah no, not him. But it becomes pretty goddamn clear when somebody turns on you. He walked out just before the bullets started flying. Fucking Chuckie. Shit.

There were a few more shots, but they sounded like they were on the other side of the wall. I didn’t know it then, but all three of our guys outside were dead. I had hoped that one of them was still out there doing his job.

The garden gate swung open, and two guys came through. We kicked the table over for protection, and they chopped the shit out of it. Splinters flew everywhere but nobody got hit.

That made even Charlie laugh.

The table took another battering, but it was quick. They were dry. We looked at each other, thinking the same thing. We should rush them, but by the time we could move our soggy asses, they would have reloaded, and it would have been pink mist for everyone.

That’s when Chuckie bust in. The two noobs had been taking their time reloading, and still hadn’t locked in. Chuckie fired three rounds into the one guy — his face bloomed into a beautiful red mess, and then nothing but clicks.

The last shooter locked in his mag and leveled it at Chuckie’s chest. Chuckie screamed and cocked his arm back.

Okay, freeze that shit right there.

I swear I want to cast this scene in bronze, because this is how Chuckie earned his name Gun Chuck Chuck.

His pistol smacked dead on the shooter’s nose — knocked him right out. We got out of him who had sent them and then finished the day with a piñata. 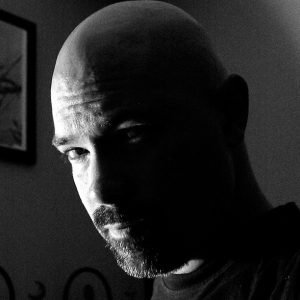 After spending more than a decade writing and illustrating comic books, Chuck (CD) Regan turned his focus on writing prose. His short stories have appeared in New Mystics, Sideshow Fables, and forthcoming issues of Space and Time Magazine, and Zelmer Pulp. His illustrations have been featured in White Wolf Games and Dungeons And Dragons publications, as well as The Big Adios, and cover art for Isotropic Fiction, and Zelmer Pulp. See CDREGAN.COM for samples. Regan is currently revising his first novel — Little Agony, a science fiction western about colonists on Mars.