They peer in the baby’s room from the bushes alongside the two-story house like peeping Toms. Lyle’s thighs burn from squatting. Jeannie twitches, rubs her stick arms. Notices Lyle’s frown.

Jeannie’s a shitty liar. You can only go to rehab so many times before it’s a joke. Before the chasm you inch away from swallows you. Took him a few tries, but he beat it. Jeannie, not so much.

Which is why he has a bad feeling about this whole baby-stealing thing.

“What’s going on here?” A cop loomed above, head craning around the dumpster Lyle and Jeannie crouched behind.

“Nothing, officer.” So much for being the sober lookout. Jeannie will surely cuss him out.

“Is she doing what I think she’s doing?” the cop asked. Name tag read “Officer Colman.”

Lyle snuck a glance at Jeannie slumped against the cinderblock wall. The needle lay next to her.

“Unh-huh.” She shifted her weight on the asphalt, grunting.

Lyle met the cop’s searing stare. Shame flooded through him.

“It’s…my…baby.” Her words moved like sewage down a drain.

“Miss, your baby will die if you don’t stop.”

A strangled wail erupted from Jeannie, the cry of a wounded animal. Her screeching morphed into sobbing.

Jeannie cried while Lyle rubbed her back.

The cop cleared his throat. “Might sound crazy. But hear me out.”

Lyle inwardly groaned as he and Jeannie huddled in the filthy alley for warmth. Why couldn’t she let it go? The baby suffered enough, hospitalized while battling withdrawals. Now she had a good home. “The Colmans are decent folks.”

“You didn’t give birth, asshole.” Jeannie sniffled. “And have your baby taken from you.”

“She’s my daughter too.” Sure, he felt a tug when he thought of what could’ve been. But that was a fucking fantasy. “What’s done is done.”

The fierce look in her eye told Lyle otherwise. “Just help me get our baby back. She deserves to be with me, not a fuckin’ cop. I’ll quit for good. I swear.”

He so wanted to believe her. To jump from the chasm’s edge to the other side.

Jeannie’s twitchin’ something fierce. Staying sober, my ass. Lyle’s dream of a family is laughable. Makes a decision.

“Let’s swing by Sixth Street,” he says. Their dealer’s corner. Ignores the pangs of guilt. “One last fix before we bring her home. Whaddya say?”

Hunger in Jeannie’s eyes. He’s got her. They flail out the bushes, stagger to the bus stop until she freezes.

“No.” Jeannie sprints back to the house.

“Shit.” Lyle hobbles after her. Legs still cramped from squatting. Hears Jeannie’s shouts up ahead. Sees Officer Colman walking out his door with a gun.

Colman’s face contorts with pity as he crosses the lawn toward her. Gun hand outstretched. “Down on the ground, Jeannie!”

Colman doesn’t sense Lyle behind him until too late. He tackles the cop, shoving him into the grass. They wrestle until Colman pins him down. Crack! Lyle head-butts Colman in the nose. Colman loosens his grip, blood gushing, and Lyle shoves him off, wrenching the gun away.

Dazed, he struggles to his feet, spurred on by Jeannie’s cheers. Through blurred vision, sees her running toward him, grinning. Lyle points the gun at the moaning cop, then spins toward Jeannie, shooting her in the shoulder and chest. Her eyes widen in disbelief. She stumbles, collapses onto the grass. Lies still.

Lyle tosses the gun as he falls to his knees.

No way is he dragging their baby into the abyss. Because it’s coming for him and Jeannie. Just a matter of time. 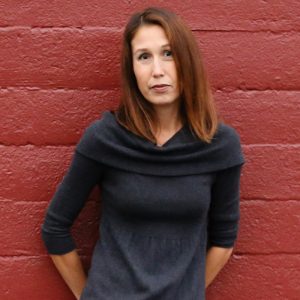 Sarah M. Chen has published over twenty crime fiction short stories with Shotgun Honey, Crime Factory, and Betty Fedora, to name a few. Cleaning Up Finn, her noir novella with All Due Respect Books, was an Anthony finalist and IPPY award winner. Her latest release is The Night of the Flood, a “novel-in-stories” from Down & Out Books which she co-edited with E.A. Aymar. Visit Sarah online at https://sarahmchen.com.