She was as nervous as a lizard sunning itself on the side of the freeway. It felt so good, but getting squashed was just one swerve away. His lips were firecrackers. His eyes knew a thousand ways for you to die.

“You wanna get out of here?” he said.

Outside, the night was thick and redolent. Palm trees whispered, “You ain’t seen nothin yet.”

His car was a rough beast. It growled, but its belly was full of Taco Bell wrappers.

He put his hand on her breast. She’d been here before. She knew where it was going.

The mean car whipped through backroads curves, ate asphalt like it was fudge. His left hand drove the beast. His right hand drove her crazy.

They came to the lake to end all lakes: Ripples in moonlight. Voices of ardent insects. A breeze like the kiss your mother gives you before you ride the orphan train.

Hot hands in moonlight. She was open and willing.

She rode the man with the deadly eyes without fear. Her super power was desire, and its faith was stronger than any danger. Her orgasm was the crack of a whip, a sudden storm over moonlight lake.

The man with the fatal eyes laughed, head thrown back to show a bull’s neck.  Lightning cracked her body again, and she glowed like the moon all the way back to town.

Harvey was the kind of guy who needed to be dead. Too quick with a slap and a shove; too stingy with the love stuff. She’d married him on a two-year bender. The next two years were nothing but a long comedown. She’d bottomed out the night she took a ride with the man with the blossoming lips and the killing eyes.

Harvey took her by the shoulders and sat her down on the bed.

She knew she did. The other man’s fatal odor coated her skin like the candy covering a melted M&M. She was still oozing like chocolate.

He took her the way he always did, letting her know she was like the bed or the table, just another thing of his. No lightning cracks here. Her skin ached for moonlight.

Jasmine fell through a gentle summer rain the night Harvey died. A shadow at the window, a midnight walk, New Orleans gleaming across the lake like a pile of discarded 7-Up cans. Outside, she saw the silhouettes through the window shade, one thrusting and thrusting, the other struggling, stumbling, falling. Good-bye, Harvey.

Hello, burning kiss. He met her outside, in the shadows under the magnolias. She handed over the three thousand bucks, feeling like that kiss should have been worth a discount.

He held her wrists.

She squirmed against him. He pulled her hands behind her back. It made her crazier. Mouth open, panting, she lunged for his tongue, and he let her have it again. A kiss deeper than the grave, hot as hell.

She fell back, breathless, letting her body arch back against his pinioning hands. “I want you,” she gasped. “I want it. Please.”

He looked down at her with those death eyes.

“I don’t mix business with pleasure,” he said.

“What about the other night?”

“That was business, too.”

One steely hand still capturing her wrists, he put his other on her breast. She moaned, but it wasn’t really a caress. It was a warning. And her thrumming body took it.

She went still, soaked and shivering as she was. When he saw she was quiet, he let her go.

“Don’t try to find me,” said the man with the killing eyes.

She wouldn’t. But the tropical night opened for her like a ripe fruit. She knew she’d find something out there. 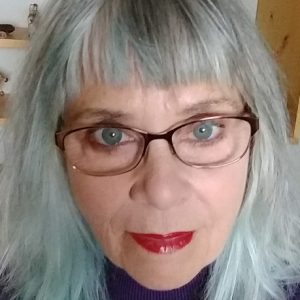 After an extremely checkered career that includes stints as a Kelly Girl, go-go girl, and housepainter, it was inevitable that Susan Kuchinskas would end up as a writer. She’s worked as a staff and freelance journalist for a variety of publications, covering business, technology and science. Her science fiction/detective novel, Chimera Catalyst, was published in 2017; the sequel is slated for publication in 2019.