My apartment building is on a very steep slope. It’s a bitch to hike up in the summer time and a bitch to make your way down in the winter. But sometimes at the time when the night is reaching its silent pinnacle, I sit out there and I can see the whole city. Every window. Every light. Activity. I sit out there until every light blinks out of existence and I’m left alone with just the dull glare of the streetlights and the cockroaches that always move as though they got somewhere to be and maybe they do.

I think about Harry often at these times. Harry bleeding out on the kitchen floor. He fell on his own leg, awkward. The way his eyes were at the end. Like empty apartment windows.

Afterwards the pistol felt too heavy in my hand, like it had suddenly gained three pounds even though it should have been two bullets lighter.

I still wear the Rolex I unclasped from his wrist. It keeps pretty good time. I wear it every day. Mikey got the gold chains from around his neck. He hocked them because he said he didn’t want nothing that ever belonged to no fucking rat.

Mikey said you gotta puncture the lungs otherwise when a body starts to rot it’ll float to the surface. So, we took turns stabbing Harry’s chest. At the time it made me think about when I was in the first grade of high school, I wanted to learn to play the drums, but my folks didn’t have the money for that. They never had money for much of anything. Sometimes I wonder if my life might’ve turned out differently if I had learnt something. Anything.

I washed Harry’s blood from my hands in his kitchen sink. We mopped and bleached the floors. We wrapped Harry in plastic tarps and weighed him down with a set of dusty dumbbells I found in the garage.

We put Harry in the river. That was how you took care of fucking rats, Mikey said. I didn’t say nothing. I just watched Harry sink down into that twilight water. Darkness with the yellow moon all cut up on its surface.

Afterwards, when we were done, we went back to the club. The place was empty when we got there. It was dark there too. Mikey switched on the lights, went behind the bar and took down a bottle of rye from a shelf and poured us a couple of drinks. I said I needed to take a piss. The shitter stank bad and I tried to be quick. The surgical tape that I was using to hold the audio recorder to my inner thigh was itchy as hell and the mic was a pain in the ass. Jerome, the agent who handled me was always bitching and telling me to get a better motherfucking quality of audio for them. Position the mic better so it didn’t sound like I was taping a whore mumbling with my small cock in her mouth. That Jerome, he was a pretty crude piece of shit for a fed.

When I went back into the bar Mikey was drinking slowly from a shot glass and watching the news. Mikey said the Iraqi’s had just invaded Kuwait and I said I didn’t even know where those countries were. I got Mikey talking like I was supposed to. He trusted me because of what I had done to Harry. I asked him when we were going to meet those Canadians about the H and then Mikey talked his way into a prison cell for life.

When I’m watching the city lights die out slow, I think about Harry and I wonder if Mikey ever thinks about him too, the way that I do. He probably does. He’s got nothing but time now but I look at the apartment building the feds have had me hidden away in for the last couple of years and I wonder which one of us is really doing the hard time. 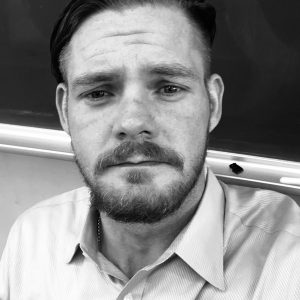 Stephen J. Golds was born in London, U.K, but has lived in Japan for most of his adult life. He enjoys spending time with his daughters, reading books, traveling, boxing and listening to old Soul LPs. His novel Say Goodbye When I’m Gone will be released by Red Dog Press in October 2020 and another novel Glamour Girl Gone will be released by Close to The Bone Press January 2021