Andrew came into the front room with two glasses of red wine, all smiles.

“Michael,” he beamed, “here’s a nice red for after our meal, just to take the edge off…”

Michael said nothing. He was sat on the left of the green leather love seat, facing the TV, which quietly played a late evening variety show showcasing a big, round, blue couch populated by a smattering of minor celebrities discussing an issue they otherwise should not be commenting on.

Andrew put the glass down on the table beside Michael, and sat to the right of his lover.

Sipping the wine, Andrew said, “Doesn’t she look a bit off in that dress? Her in the orange. What do you think?”

“Still mad at me?” Andrew asked. “How can you still be mad at me? Come here you…”

He wrapped his arm around Michael and pulled him close to him, the younger man not resisting.

Andrew was forever afraid something awful might happen, but here with Michael…

“We were so in love once,” Andrew whispered into Michael’s ear. His lips touched the lobe, feeling its coldness.

Andrew cast his mind back: they had first met in a nightclub, chatted a while, and then had gone outside to a nearby park for a bit of private fun.

The romance was not that old at all really, but for Andrew, it felt like a lifetime of joy. He squeezed Michael’s hand, before going back to the kitchen to bring the whole bottle in.

He filled both of their glasses to the top and sat back down.

“The only party that could be better would be a party of three…but you’d know all about that you dirty little bastard!”

Andrew laughed and grabbed Michael’s lower thigh. He held it tightly, and then began to rub from the knee up and back down, over and over.

“Christ I love you,” he said, licking his lips. “Loved you a long time now…”

Michael’s flesh was cool and stiff, but not as stiff as it once was. The rigor mortis had worn off, and decay proper had begun to set in.

Earlier in the evening, Andrew had given Michael a bath, washing his armpits and nether regions, shampooing his hair and trying not to allow too much more to fall out. He had also cleaned Michael’s abdominal stiches—disembowelment was a nuisance, but it was the best way. The local dogs seemed to like it…

Andrew took Michael’s head in his hands and twisted it around to him. He kissed him tenderly and moved his fingers down to the deep, wide, red-purple line around his neck.

He scratched the line as though it was itchy.

Andrew suddenly rose up, pointed his finger at Michael and shouted, “Nothing but a drama queen! A tease! A real bitch! A—!”

There was a loud knock on the front door and Andrew hushed.

He threw a large blanket over Michael and went down the hallway to see who it was. He returned a moment later, carrying a package.

“Mrs Woodhouse next door,” he said, placing it on the coffee table. “Said it came today…I’ll open it later, it’s probably nothing too important.”

“She didn’t say anything about our quarrel,” he said. “Why would she? She was mortified I bet…”

Andrew stroked Michael’s cheek with the back of his hand.

“Why do we quarrel so?” After refilling the wine glasses, Andrew got under the blanket with Michael, settling down and watching a film about an unfulfilled woman in the American Mid-West. 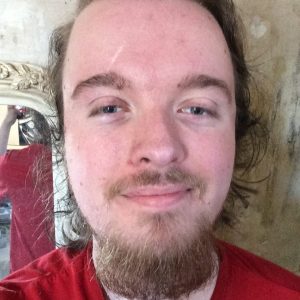 Harris Coverley has short fiction published or forthcoming in Horror Magazine, Planet Scumm,and Trembling With Fear, amongst others. He is also a Rhysling-nominated poet, with verse in Star*Line, Spectral Realms, Jitter, Utopia Science Fiction,and elsewhere. He lives in Manchester, England.