Jake always liked these cool afternoons.  Yes, they were possible even in a Louisiana fall which sometimes had trouble emerging from the sweltering summer.  Like this  November afternoon when the outside chill seeping into the house made Jake put a flannel shirt over his wife-beater. He breathed in the scent of sweet, dry leaves.  Pecan probably.  He wondered if he would see him today, the pecan man.   Earlier in the day,  he had seen the man, walking along the lane in raggedy clothes, clutching a ball of burlap.  Did he know about the stash?

He took a quick look outside and remembered a scene from last year.  Mr. Lester had been his father’s best friend and had been right by his side when he died of stomach cancer.   On the day of the funeral, after all the neighbors had gone, he noticed Mr. Lester sitting on a rusty metal lawn chair.   It was a warm October day,  with sunshine that seemed to increase in brightness.    Nothing was said for a long time until Jake heard Mr. Lester get up.  He  placed his hand on Jake’s shoulder.

“That was the hardest thing I ever done.  Carrying yo’ daddy to be buried.”

And then he started to walk to his own house.

It  was then he knew that his father’s “ title” had been passed to  him—Guardian of the Treasure.  When Jake was 18, his daddy told him about how  he and Mr. Lester robbed a bank in Texas almost 30 years ago. Big haul. Jake’s momma knew and took the secret to her grave.  The trick, his daddy said, is to keep moving the stash, even though it could be a pain in the ass,  especially if it’s buried, and  to just  live normal.  Not too fancy.  If you got a new truck or gun, just say you were saving for it  if anyone asked.  Jake’s daddy never told him if he ever had to do anything to anyone who might have discovered the secret.  There were stories on the local news every now and then, however,  about a body being found in a field that made Jake wonder.

For the rest of the afternoon, Jake sat on the porch waiting for the pecan man.  He watched the sun burst through the clouds every so often  and the few pick-up trucks that rambled down the lane.  He got up to get some water, a sandwich, to take a piss, but he always came back to the porch for the pecan man.

When Jake woke up, it was almost five.  He rubbed his eyes and was about to go inside when he saw him.  There,  walking along the lane was the pecan man.

He let the man walk out of his sight and only then did he slip on his jacket.  The pecan man had just turned to the left, just across the lane from the barn.  He remembered that an old abandoned house used to stand there, bu tit  had been torn down years ago.  No one had bought the land, but there were several big pecan trees there.  Anyone could basically go there and help themselves to pecans—-and maybe to the money now buried under one of the trees.

The pecan man had his back to Jake.  He was on his knees shoving handfuls of something into one of the burlap sacks, and then he fell flat on the ground.  He rolled over and with his bloodshot eyes, he saw Jake with the branch.  The next blow hit him in the mouth, and when the man spat, Jake saw blood and what might have  been a tooth.  The branch then  thudded  repeatedly  against  the man’s head.

Panting, hands on his knees,  Jake looked around and noticed that no soil had been disturbed.  He kicked at the sack and pecans rolled out, probably picked to sell for a little money to the locals for pies and pralines. Jake would take them to the house, get his truck,  dump the body  after dark, and keep watching. 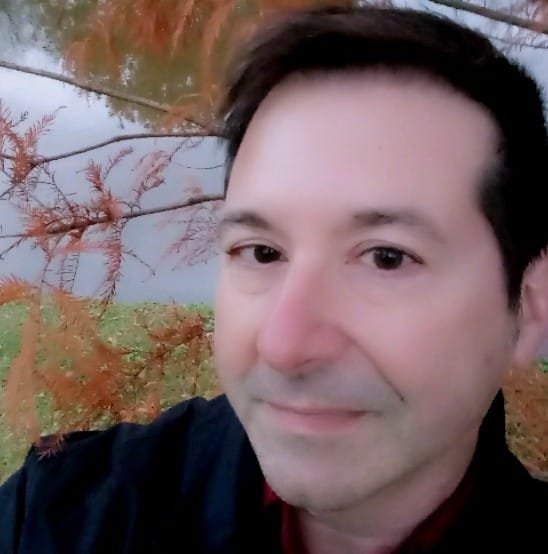 Andre DeCuir teaches at a small college in Ohio.  He enjoys writing fiction and poetry, and his work has appeared in places like Mystery Tribune and Heron Tree.