I’d rode iron out to Ed’s Drive-in in The ‘Goula because this was how I wasted my Saturdays to get away from the cats & brats—Sister’d had some hard luck, and a week’s stay was going on a month now, three screaming shits and a sack of hairballs along with her. Fuck familial duties. I was headed back to the Glades quick as paydirt hit.

But, Ed’s had the best chili-dogs that side of the Coast (They’d put a Ward’s in Long Beach but it was the ass other way from where I needed to be).

Old Scranton, Mississippi. Fuckin’ Crapscagoula. In a race with Jersey for the dirtiest beach in the world. Close race, too. Bunch of drudge water pumping out of the Singing & Biloxi rivers. Poison spilling off the shipyards and the backwash coming in off the rigs and the sound. Sometimes the water was damn near black nasty.

I had called up my buddy Lonnie, a contract investigator for a couple of shysters over in downtown. Supposed to meet him at Scranton’s, old puddle and grubhouse named after The Goula’s original title, before they got all PC and bullshit with that Indian crap. I hated their bland-ass old cracker food, so I got me a sack of Ed’s.

I sucked beer while Lonnie shoved boiled taters and corn in, and barfed his business out. Dumbass seersucker suit and boat shoes. Always with that shit. Just like an asshole.

“You free for a while today?” he asked.

Nena, my fat-ass, fuck-getting-a-job, bitch of a fat sister, had handed me a shortlist of ten or fifteen crappy errands to do, you know, “while you’re out.” Like she was my fucking wife.

“Got some papers need serving on this guy. Can’t get no address. Contractor on some big construction job that went fraud. Prolly mush as victim as the plaintiff, but that’s his itchy dick. I’d run it down myself, but I’m off to Brandon, up on the Reservoir. Bunch of richies on this case. Can’t wait to hand papers to those dips. Prolly slip it to least one of the wives; you time it so you know thefucker’s out of the house. You know, long as she ain’t hit the Ben & Jerry’s too hard. Lot of these trophies head south fast, these days. Fuckin’ shame.”

I thought of Nena. She’d been on the Jerry’s since high school. Never gave a shit. Never did get how she got her ex interested even the three times they had evidence of, all leaving shit-stains on my new couch that very second, no doubt.

I cranked my bitch and barked her pipes at the old blue-hairs walking into Scranton’s and roared out of there like I was mad as hell. But, I was singing God’s grace for landing me a cash money reason not to go home.

Ran the guy’s name through the UPS tracker. Buddy worked at the center up on 90. A cold beer bought five minutes on the company laptop. Had an address. Donniebrook off 613. Way the piss up in Escatawpa. Fucker.

Nearly and hour’s ride, and three times past the spot there shoulda been a door to knock on, I decided UPS had done me wrong at long last. Nothing but a slab and a half fell-in set of studs. Guy’d likely started the house and hung it up. Out of cash. So, I did a thing you never, ever fucking do.

I rolled down to the local quickstop, shithole called Buff’s, and asked if they knew the mark. Great way to get your ass diddled in the back lot. But, I had a hunch.

“Big Mike?” guy at the counter said. “Shit yeah. I hear them play all the time. Plays with some boys a lot down at Frets.”

Bought a pack of camels and a 5-hour and hit it again.

Frets was a new-ish little wannabe piano bar. Live blues and jazz and all that Gulf Coast fake-ass trying to be Little New Orleans shit. Ghosted in there, too. All the real play drove out to O.S. where the glasses were cleaner and the tits faker.

But there was my guy. 40’s. Run-down but still cut a decent line. Not a bad piece of dick, were I looking. Had those busted, broke-down, sad eyes. Lonnie was right, prolly was caught up in some rich boy’s pet real estate scam. Prolly why his house was half-built. Last thing he needed was news he was sued.

But, a buck’s a buck. And like Lonnie said, that wasn’t my itchy clit. 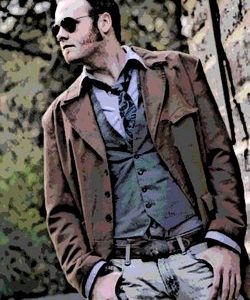 Jason Stuart is the author of Raise a Holler and Screaming Woman Road. He lives in Mississippi, rides a motorcycle, and roots for the Gators. Catch him online at JasonStuart.net or @killafella on Twitter.