The Girls Who Go to Wildwood

“No drugs from strangers.”

It was Stephanie’s only rule. She said it every time they split up for the night, the Giant Wheel looming over them at the end of Mariner’s Landing. “I mean it. Even if the guy’s being nice. Especially if he’s being nice. Don’t do anything you didn’t get from me.” She’s been saying it for a long time, for years, before now.

This is what plays through Julia’s head the entire time he kisses her. She’s pinned against the wooden pillar, her lips growing numb as her feet sink deeper into the sand. The first joint has hit, and even under the boardwalk, on the other side of that enormous beach, she can hear the ocean.

When his hand moves between her legs, she catches his wrist. “Let’s smoke some more first.”

For half a second, his eyes go dark. He’s older, probably in college. His hand stays in place, spreading over her.

“It helps me,” she says, her voice shaking.

He smiles and steps back, like her fear has put him at ease. “Lucky me,” he says, taking the lighter from his pocket.

She opens her purse and offers him the second, carefully rolled joint. “I went first last time.”

He takes it, never moving his eyes from her. “You cold?”

When Stephanie first pointed him out in the arcade, he didn’t make sense. Julia almost asked if she was sure this was the one. Somehow, she couldn’t reconcile this ordinary boy with the memory of her beautiful, glamorous cousin grabbing her by the wrist. I need to talk to you. With Stephanie speaking slowly, carefully, and crying as the story spilled out.

Now Julia can see it.

She giggles as he puts the joint between his lips. “I’m already pretty stoned. I don’t think I’ll be able to take the whole thing.”

He’s still looking at her, the joint clenched in his mouth, frozen, unlit.

What did Stephanie say? Got to be cool, kiddo. Cool. Cool. Cool. Her eyes don’t leave his. “You know what I mean,” she says, and her voice doesn’t sound the same.

He snorts, looks down, and finally, lights it.

When they were little, Julia hated that she and Stephanie didn’t look alike, that you would never guess, just by looking at them, that they were related. That they confided in each other.

At first, all he does is cough, which scares her because coughing is normal. It’s not until he passes the joint back to her that they both realize he can’t stop coughing.

She doesn’t look at him again until after he’s dropped to the ground. As he starts to writhe, she smooths down her footprints in the cold clay sand.

She didn’t ask what was in it. Wasn’t important, she figured. She always left those things to Stephanie.

At a party a month ago, a boy from St. Peter’s Prep asked Julia how she was going to spend the summer. When she told him she was going down to Wildwood with her cousins, like she did every year, he smiled.

“Everybody knows,” he said, “that the girls who go to Wildwood are the sluttiest.”

This boy, and not the one under the boardwalk, is who she thinks about as she leaves the beach.

It might be the weed, but in that moment, the Giant Wheel, massive in the distance, green and orange lights blinking and spinning, is the most beautiful thing she’s ever seen. 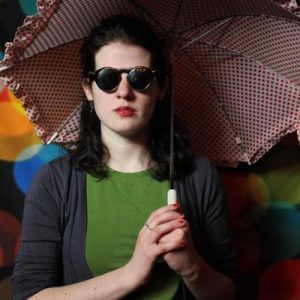 Erin K. Coughlin grew up in New Jersey and graduated from Sarah Lawrence College. She currently lives in New York where she writes and performs comedy with SOAP, an award-winning, vomit-inducing sketch team. Her horror fiction appears in Dark Moon Digest. It has been said she possesses an air of "sadistic whimsy."