Betty noticed the sandalwood fragrance as soon as she entered the apartment. She’d smelled it before, the woodsy, citrusy scent clinging to her husband’s clothes. Foolishly, he’d done little to conceal he was slumming it on the east side. And even more foolishly, someone had locked the door but left it ajar.

Afternoon light warmed the space, littered with books and records spilling out of their sleeves. Coltrane, Television, The Velvet Underground — the woman had taste. They might’ve been friends. Before Betty married and had kids. Before the woman had her husband.

An easel stood by a glass door leading to a balcony slung over a dirty street. She walked around the painting, hoping it would be amateurish — laughable, the work of a dilettante. But nothing could have prepared her for the image standing there, mocking her. An elegant portrait of her daughters, long-legged and laughing, on the dock at their lake home.

Betty couldn’t imagine how he bribed the girls to keep their mouths shut. But even worse, her children were protecting her, and maybe even loved her, the woman.

A bottle of Johnny Walker and a couple of glass tumblers sat on the coffee table. She poured a drink and took it down, the scotch barely whittling her rage. She paced and caught sight of the bedroom, reached into her purse and felt the smooth curves of the cold metal.

She entered the room and stared at the messy bed, imagining her husband wrestling the sheets, his clothes scattered on the floor. Jealous he’d found an escape, here in this place.

A part of her didn’t blame him. She could never tell anyone her own fantasies of running away. Dropping off the brats at school. Heading to the coast. Checking into an ocean-front hotel, day drinking and sleeping with whomever she pleased. Being someone else, someone free — someone like the woman whose apartment she was in now.

Betty collapsed on the bed and stared at the ceiling, strangely aroused that she had penetrated his secret space. Her hands clenched the sheets. She drew herself close and began to flush just as the front door clicked. She rolled off the bed and ducked behind the door. Clothes rustled in the front room, and her husband’s voice boomed.

“She’s acting strange — stranger than usual. Poking around my desk, giving me the evil eye. Listening when I’m on the phone. I think she knows something.”

“Of course she knows something. Wives always know. Your daughters probably spilled the beans for one thing.”

“Nah, I made sure they kept their mouths shut. Besides, they act like they hate her. And vice-versa. Honestly, I can’t understand it. I thought the mother-daughter bond was a sacred thing, but not with her. They seem to adore you, though.”

“Because I don’t tell them what to do.”

He grumbled and walked in front of the painting.

“Wow, this is beautiful. Can’t wait to see it hanging in the house.”

Betty darkened the doorway and glared at her husband. His eyes fell on the gun in her hand. The woman gasped and scurried towards the balcony.

“Betty, darling, what are you doing?”

“Honey, listen, you’ve got it all wrong.”

“For once, I’ve got it right.” She trained the piece at his head.

“Betty. Wait a minute. Look.” He turned the easel around. “I commissioned Mary to paint it for you for Valentine’s Day.”

“I’ve already seen it. The only way she could have painted that picture is if she’d been there, at our home, with you.”

Silence roared in the room. Betty scowled at the two huddled by the painting. She fired the gun, blasting the artwork to bits.

“Betty, please,” he begged. “Don’t do anything you’ll regret.”

The gun discharged, and Betty dropped to the floor. 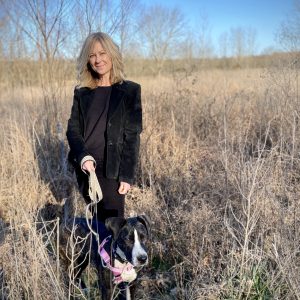 Wendy Davis is a copywriter living in Nashville, TN. Her work has appeared on Welcome to Twin Peaks, Story and Grit, and 25 Years Later. When she’s not writing, she’s reading, watching some old movie, or walking her treasured hound, Blossom. Find her at wendydaviswrites.com and @zeewendyd