This was the deer camp on a recent November night: two leaf- and mud-daubed trailers, a weathered plywood plank serving as the breezeway roof between their doors. They were of a late Fifties vintage, so small two large men could not easily maneuver around each other in either.

That night, before the last day of hunting season, light snow began to fall. The small, round-cornered windows were lit a melted butter yellow.

A winter pastoral – obliterated by a rifle blast through the roof of one trailer, a report and flash, the plywood flipped, clattering to the snow-dusted ground.

How did the Forcier brothers reach that November night?

The brothers were a malevolent force in the hardscrabble city where they grew up and then worked in positions of authority. Lyle was a policeman. Clifford, a fireman. In these jobs, the Forciers inspired fear rather than respect in the local populace. Rousting prostitutes at Rye’s Savoy Rooms. Terrorizing pimps and basement casino operators at the north end of the city, alley-pummeling informants of any race or religion. Lyle was indiscriminate. Clifford had a yen for women who were victims of fire.

Lyle wed Pauline when she was seventeen and didn’t know much beyond the city limits. A white wedding at St. Stanislaus in the spring of 1958.

Clifford stood as Lyle’s best man. Within a year, he was Pauline’s.

Each November, the Forcier brothers hunted whitetail deer amid the birch and pine of northern Wisconsin. They would perch in their separate trees, hunt with their thoughts, and wait for a buck to approach, stop, then walk into the riflescope’s view.

The decades passed. The brothers, pensioned, bloated out of their time, began a life of workaday joes adrift.

In retirement, Lyle with other ex-beat cops at Tony’s Bar, Clifford and Pauline would meet. Clifford joked, “Whoever said we couldn’t be animals at this age.” Pauline laughed, shifted her aging Honey Crisp shape astride him for another ride.

The brothers drove to Winnipeg, flew to a lodge, and then were flown farther north. It was at the moose camp on Lake Ste. Marie in northern Manitoba where each vowed to kill the other.

Expensive Canadian whisky drunk like water induced a blather only they could understand. Lyle, worrying the possibility of esophageal cancer in his future, said, “Shoot me if I ever come down with that, you miserable fuck. Shoot me like a broken-down horse – ” thumped himself with a thick finger between the eyes “ – Right. The fuck. Here. Yes?”

Clifford spit out too enthusiastically, “Goddamn right.” Then he remembered himself. “And you me, yes?”

Passing out slowly, Clifford dribbled out, “Thank you kindly.”

A recent November night. The two are at the deer camp. Lyle was diagnosed in September. He knows this is his last season.

The Forciers drink, recount better days, and this unlucky one. No trophies. Lyle coughs dollops of blood-streaked sputum, shot from between his lips into the unlined wastebasket. Fuck it. Someone’s dying.

Both brothers, eighty, eighty-three, have their rifles loaded. A Winchester. A Remington. The waste of the day. Aged knees nearly touch in the tight trailer.

Clifford knew the diagnosis. He could do this, though he’d rather die than shoot his brother. Nothing to do with Lyle. He’d rather die. Dead like Pauline. She passed the previous winter. The cancer roved from breast to bone to brain. No word sent to Clifford. He offered to sit with her. Lyle told him no. He could do it.

Lyle’s Winchester was ready. They drank shots, toasting long lives. They’d done whatever they’d pleased. He held his rifle between them, the butt on the floor.

Clifford reached a spotted hand for the rifle, but Lyle’s grip was tight.

“She didn’t want to go, not with the guilt.” He laughed, suffered another scouring cough. “She thought, good Catholic as she was, she wouldn’t get past St. Peter with the weight of all that guilt.”

Clifford opened his mouth. But Lyle said, “Motherfucker,” and fired. The breezeway roof clattered away.

Then, one final blast. 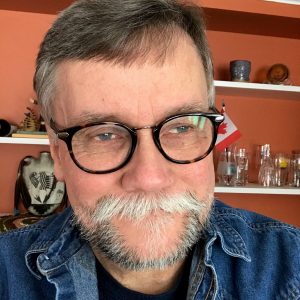 Jeff Esterholm uses the environment of the Upper Midwest – strictly speaking, the south shore of Lake Superior – for seeding his crime fiction. To his delight, “Payday Friday” is his third go-round at Shotgun Honey. His work has also appeared in Akashic Books’ Mondays Are Murder, Yellow Mama, Crime Factory, and Mysterical-E, as well as in Midwestern Gothic, Cheap Pop, Regarding Arts & Letters, Wisconsin People & Ideas, and Flash Fiction Italia. In years gone by, his work has been recognized by the Council for Wisconsin Writers. He and his wife live in Superior, Wisconsin.