Chris Pennington woke up in his recliner at 3:07 AM. The Phillies game from last night was being replayed and was in its third inning. Chris thought he made it to the seventh or eighth inning earlier. He felt good, felt better than he had in months, maybe years. Pulling the recliner upright, his face went from relaxed to rigid as he remembered why he felt better: he had decided to kill his youngest son and he knew it was going to happen in a few days.

Beside him were two fingers of whiskey, he finished the glass. He got up and walked to the kitchen.

The last decade was a circus of drugs and crime for their 26 year-old-son Max: two DUIs, one misdemeanor and escaped a felony conviction. Treatment facilities were a revolving door for Max. Somewhere along the way Chris figured out that he and his wife Karen spent over $73,000 helping Max out.

Chris put the empty glass in the sink, opened the refrigerator, and grabbed a bottle of Miller Lite from the bottom shelf. As the door swung itself shut, he twisted off the cap and took a swig of beer.

The first visit from the police was when Max was 15 years-old. There’d been a rash of robberies in their neighborhood that Chris figured was a white boy with nothing better to do after school. What he didn’t figure on was that the white boy was their son. Chris knew now that the system and the judge proved too lenient on Max at the time.

He sat back down in his chair and watched the game. Phillies 3 to 1 over the Mets.

Another sip of beer and to bed soon. He hadn’t always been a light sleeper, the tossing and turning and mumbling in his sleep all had come during Max’s troubles. Even since his decision, Chris still hadn’t gotten a good night sleep. He hoped sleep would come afterwards.

There were other visits from the police. The last one was the oddest and the one when Karen finally agreed to kick Max out of their home. Three years ago on an October Saturday when Max hadn’t been home in days – this wasn’t unusual at the time – out of nowhere Max barreled into their house, out of breath, ran to the refrigerator, and started pounding beers. By the time Chris and Karen got to the kitchen, Max was already on his third and the police were beating on their front door. Max ended up getting out of the DUI but did get charged with fleeing the scene of an accident.

Chris had a few sips of beer and smiled as the Mets struggled.

The idea came to Chris a few months back showing up in that time between being fully awake and being asleep. The idea never stayed that long. Five weeks ago, Chris found Max rummaging through their refrigerator at 4 in the morning. Max had crawled through an unlatched window, the screen popped out, and the idea hit Chris hard. Max looked up from the refrigerator door with the same guilty look he had at six or seven.

“I’m going back to bed,” said Chris. “Just use the door when you leave.”

The next morning Chris read an email from his neighborhood association. A break-in happened the previous night. Two laptops were stolen. Later that day Karen was not pleased when Chris brought home a $500 .38 caliber revolver, but she took classes with him on firearm safety and participated in one round at the shooting range. Maybe not tonight or tomorrow night, but soon Max would break into their house and Chris would “mistake” him for an intruder.

Like the Mets’ starter, Chris didn’t make it past the sixth inning. He turned off the TV and headed to their bedroom. At the end of the hall he saw Karen standing, the revolver pointed at him. She pulled the trigger. 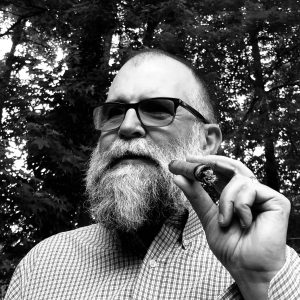 David Nemeth lives in Wilmington, Delaware with his wife, son, and two dogs. He is a graduate of Emerson College with a BFA in Creative Writing. He is the editor of Unlawful Acts, a columnist at Do Some Damage and has written for The Thrill Begins. He's had fiction published in Flash Fiction Offensive.