It had been the Dane all along. Gustav knew he saw the car behind them as they left the city. The Dane had just waited until they were out on the country road before making his move. Speeding up and charging in. Gustav had lost control and the ice had taken care of the rest. Now there was a tree branch through his partner’s neck in the passenger seat, and the gun was somewhere on the floor.

Gustav leaned down after it but could barely move. The seatbelt was still stuck. He freed himself and leaned forward, reaching down under the seat. Blood gushed from the partner’s neck onto Gustav’s hand. He tried to ignore it. He reached further in and felt the handle. He gripped it and pulled it up, peering into the cylinder. Still two rounds left.

Gustav pressed the door open with his leg and rolled out, scraping his knee on some rocks on the ground. He tried to ignore the pain and the cold, but he couldn’t see anything, and that worried him. He knew the Dane would be around somewhere. The Dane never left a job half finished.

Gustav crawled up and checked the other side of the car, gun arm resting on the hood. He squinted past the thick branch that pierced the windshield. Nothing but snow and white fog. He edged to the front of the vehicle, supporting himself against the wheel. His leg hurt more and more. He looked down at the ground and saw a nasty cut on his thigh. He was stuck. If he tried to move, the Dane would find him. He wouldn’t even be able to move fast enough to get away. The Dane would catch up to him, no problem. He only had one choice. To stand his ground. Against the Dane, of all people.

Gustav slumped down again by the wheel. It was a decent car. Big and bulky with four-wheel drive. It could handle off-road pretty well, normally, if it wasn’t completely busted. At least now it could give him decent cover.

Gustav held his breath. He could hear snow crunching somewhere on the other side of the car. He clenched the gun with both hands and held it up, ready to turn around and fire as soon as the sound came close enough.

Then the footsteps stopped.

Gustav stopped moving. The Dane was playing at something. Something psychological, trying to flush him out to make him an easier target. Well that wouldn’t work. Gustav knew his chances were slim, but he wasn’t going to make them slimmer.

“Look,” the Dane said. “I’ve got no beef with you. It was your partner. And the goods. Hell, I haven’t even seen your face.”

The Dane opened the passenger door and unbuckled the partner’s seat belt, reaching in and picking up the goods most likely. Gustav remained still.

“I’ve got what I came for,” the Dane said. “I’ll be leaving now.” He sighed. “Closest town is two miles north. You can make it there on foot, even if you’re injured. And I’d move soon if I were you. It’s getting dark.”

The Dane walked away, his muffled footsteps disappearing in the wind. A car ignited somewhere, and Gustav could see the car drive past him on the road above, lighting up the snow briefly before disappearing into the fog.

Gustav drew a heavy breath but stayed still. Even though he was pretty sure the Dane had taken the car and left, there was still a slight suspicion that it was all a trap. That the Dane was waiting for him in the woods, ready to take him out.

Gustav swallowed and stood up, leaning against the car. He held his breath as seconds passed. There was not the slightest movement or sound out there. He limped away from the car and climbed back up to the road, still half expecting the Dane to suddenly appear.

Even as he made his way to safety in the next town over, that terrifying thought remained.

Perhaps it always would. 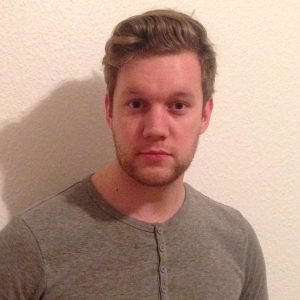 John Björling is a game designer and writer from Sweden. He has had a number of short stories published, such as The Cage for Structo Magazine and The Monument for Lion Lounge Press. He currently works as a narrative designer for Ubisoft Massive on Tom Clancy’s The Division. He can be reached at [email protected].