The man, bent and old, moved with care through the oncoming wave of pedestrians. He knew his age made him insignificant to the rushing world, and, when he was out and about, he did his best to keep out of its way.

Still he was unable to avoid a stream of adolescents, and they almost knocked him off his feet. One murmured an apology before all of them jetted from view. He shrugged. He’d been young and heedless once.

Next, a school of teen-age girls darted toward him, their hard nipples pressed invitingly against their shirts. To his regret, none of the young misses brushed him as they swam past. Back in the day, he would have chased after them. But those days were over. Now, his best chance of catching a woman was to set his sights on their grandmothers.

The crowd of passersby thinned when he reached the last storefront. He continued away from the quaint downtown and toward the shabby homes of the working poor. Only the discarded toys and bits of trash lying on scraggly lawns revealed the houses weren’t long abandoned.

The old man tore a bloom from a bush, impaling his thumb on its thorn. He bled until he reached his destination, a bungalow hidden away from the curb. Though his age made him invisible to most, here he hoped the desires that still raged in his breast might be satisfied. He knocked on the door, confident the flower would gain him entry.

The crinkle of pushed-apart Venetian blinds drew his attention. “Who is it?” a woman’s voice asked.

“I’m a new neighbor.” He pointed his wounded thumb toward the end of the road. “Not many people our age live on this street. I thought I might come by and introduce myself.”

“And what would your wife say to that?”

“Maria’s been gone ten years now.” He grinned at Mrs. Estevez, with teeth yellowed by age and neglect. “I’m told you’re a widow.”

“You could say that.”

“He’s been in the ground seven years.”

The old man waited, the drooping blossom clutched in his hand, for the widow to make up her mind about him.

“Give me a minute,” she finally said.

Mrs. Estevez must want to tidy herself for her unexpected caller. That’s what his Maria would have done. After a bit, the locks on the door twisted and rattled, and the portal to her domain flew open.

His fist, still clutching the rose, smashed her face, and she fell back into the vestibule. He stepped over her and locked the door behind him.

Mrs. Estevez lay still amid the scattered red petals, her dress bunched to her waist. Maria would have been the same age, if she hadn’t angered him that one night a decade before. The widow groaned, and he kicked her hard. She quieted.

He wandered into the living room, hoping to find a souvenir to mark the occasion. After all, this was the first time he’d indulged in his favorite pastime since he parted ways with the state. He spotted two picture frames perched on the fireplace mantel. The first held a photo of a younger Mrs. Estevez with two sad-eyed children, and the other a newspaper clipping with the headline: Woman Acquitted after a Lifetime of Abuse.

He heard a click and turned around. Mrs. Estevez stood with one hand pressed against her ribs, while the other pointed a revolver at him. She grinned through a bloody mouth. “I’ve taken worse than this.”

The old man let out a long breath. He should have known females grew wilier with age. He studied the gun’s loaded cylinder then shifted his gaze to Mrs. Estevez’s eyes. He was adept at reading women after a lifetime of killing them, and he knew his game ended here. As her finger tightened around the trigger, he closed his eyes and a sea of young girl’s nipples appeared in his mind’s eye, leaving the widow to puzzle, afterward, why a man would smile at his own death. 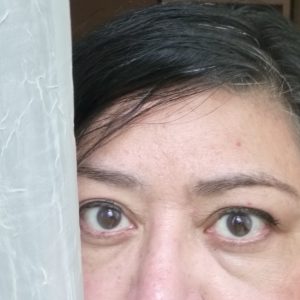 Moving to the Pacific Northwest inspired R.Marquez to create the fictional city of Couper, Washington, nestled on the banks of the Columbia River. Most folks there lead law-abiding, peaceful lives, but there are exceptions. A few prefer Couper’s dark side, where evil people do evil things, and those are the ones R.Marquez can’t stop writing about.