Go in after the place closes and set the bottles, five, filled with a combination of kerosene and liquid soap, nobodies gonna care that some greaseball bar goes up in the middle of the night.  Only Gallo didn’t account for the guys sleeping in the back room.  Soon as the first fuse goes and the bottle pops and sends a sticky wave of flame arching into the wall behind it, Billy starts hearing something.  Next one goes and I’m thinking of getting out of there and Billy is screaming about people in the back.  I’m thinking it ain’t my problem, cold I know, but I’m not skinning my own hide to save a bunch of people we’re supposed to be warring with.  Billy is trying to stomp out the wicks but we daisy-chained them so that as one explodes and burns, the flame is already working towards the next one automatic like.  Behind me, I hear the peel out and turn to watch through the front window as our driver hightails down the road leaving us two in a burning building and I make a mental note to plug that yellow son-of-a-bitch when I see him next.

Now the flame is creeping across the ceiling and I start coughing from the smell.  Billy is working like a lunatic to stop the fire, but he don’t see the flames building up behind him.  I yell and he gives me a glance, half-panic, half-manic.

I can still hear screaming, but there ain’t no way to save them now as the whole back wall is a tapestry of flames.  I watch the paint blister and peel and the flames seep through the crack of the door.

The smoke is getting thick and I have to kneel down to see Billy.  I move to the door ready to retreat.  The pop and hiss of another bottle sends my hand to the knob and I yell at Billy to quit fucking around, but through the growing sheet of smoke, all I can see is his shadow.  Now the place looks like a hellscape, the wood bar is lit up like the river Phlegethon, with the bootleg bottles stashed behind the bar only serving to fuel the flames.  Finally, I call quits and run through the door to the street and fresh air.  Billy almost pushes me into the street when he runs out a few seconds later.  We both double over, coughing and spitting in the gutter, not worried about cops or fire-eaters cause they’d been paid off.

“I’m going to kill that fat fuck Gallo next I see him!” Billy yells.

“You’re not plugging our boss, maybe our driver, but not our boss.”

He hacks and spits something black into the street then stands full to his six-foot frame.  We both turn and watch as the inside of the bar continues to eat itself.  Billy leans in and I know he was listening for those poor bastards in the back but looking at the destruction, I figured they were long gone now.

“Wasn’t supposed to be anyone here, he told us no one would be here.” Billy whispers.  He turns to me and I see the regret on his soot covered face.

“It never is.” I say and push him into a jog down the street.  Only so long that payoff money will last, then those uniforms will have to come investigate. 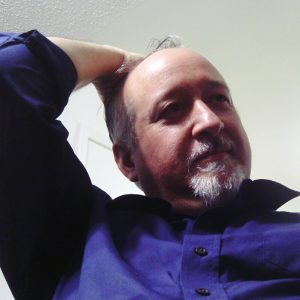 Bill W. Morgan lives in Carson City, Nevada, where he spends his days as a nine to fiver and his night’s writing and binge reading everything except Romance.His work has appeared in the Yellow Mama webzine, The Wildcat Review, The Reno News and Review, and Out of the Gutter Online.  He is the author of three books and is currently working a collection of short stories. You can find him on Twitter @akaBillMorg