Bat resting on his shoulder, Stuart maneuvered the rickety Huffy into the gravel parking lot.  The little league season had ended a few days ago.  Still, he wore his full uniform:  red cap, white jersey and pants with red pinstripes, red leggings, even his black cleats.

The late July heat was oppressive.  Stuart was soaked by the time he reached the diamond.  The others had already arrived; he saw three bicycles leaning against the back of the chain link dugout.

He dismounted, added his steed to the mix, and entered the smoky lair, grateful to be out of the sun.

“You made it,” Craig said, proffering a pack of Marlboro Lights he had stolen from his older sister.

Stuart plucked a cigarette and slid it between his lips.

Danny provided the flame with a Bic lighter.  “We were starting to think you chickened out.”

He took a deep drag and joined the others on the bench.

Craig produced a black tube of eye glare and started marking his face.

The others sat tight, rigid and waiting, gripping their bats with white knuckles.

They pedaled with purpose, working their way through the suburban labyrinth, armed and painted and ready.

Danny said, “He better be home.”

“Don’t worry,” Craig said.  “Schoolteachers are off all summer.  Now that the season’s over, he probably spends his days working on that car.”

They rounded the final turn and coasted down a hill.  Coach Cooley lived at the bottom of the descent.  They heard a radio playing in the garage.

Then they saw him.

The Camaro’s hood was up.  Their coach was standing in front of a wall filled with tools.  They rolled into his driveway, letting their bikes fall to the pavement in a haphazard heap.

Coach Cooley took one look at them and laughed.  Can of beer in hand, he emerged from the garage.

“I’m afraid Halloween is a few months away, boys.  Or maybe you all can’t get enough baseball.  Is that it?  Well, you’ll just have to wait until next April.  Until then, there’s always football, basketball, soccer.  Well, maybe not soccer.  That’s for commies and—”

They rushed him, taking out his legs first, shattering his kneecaps and shins.  He dropped, writhing and groaning in agony.  His beer rolled across the driveway until Stuart kicked it into the lawn. They formed a circle around him and went to work, pummeling their coach with unchecked savagery, five aluminum bats gleaming in the sun. 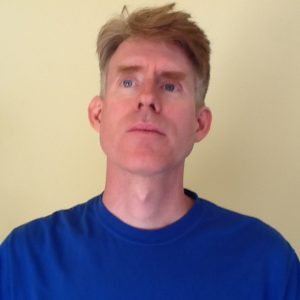 Ben Newell dropped out of the Bennington Writing Seminars during his first semester, eventually resuming his studies at Spalding University where he earned an MFA.  His poetry was nominated for Best of the Net 2017.