I’m running and the only sounds I hear are my ragged breath and my feet hitting concrete—a painful slapping noise echoing down the—what is it this time—oh, an alley. Yes, it’s an alley. Buildings lean in making me feel trapped. It’s like an Eastern European painting, I saw once. Maybe it’s made of cardboard. Flimsy street lamps with dim bulbs throw a shadow despite the starless, moonless sky. It’s like a movie set I’ve seen on screen a million times. Or more oddly been part of a thousand times.

“Don’t you ever get bored with it?” a voice asks. “This senseless running—and from a woman with no aptitude for it. Look at the graceless way you hold your arms. You should invest in some decent running shoes. Bare feet on cement is foolish. And why are your hands splayed like that. Bend them.”

I have no idea who’s speaking or from where, but I look down at my feet. Bare, grimy, and full of cinders. The soles sting. I peer behind the ash cans, check out the dark windows above me, the rooftops. Nothing.

“Well, of course, you can’t see me. I’m not part of your dream.” A wry laugh. “Do you realize how sparsely populated your dreams are? I’ve been monitoring dreams for years, and yours are the most boring I’ve come across. Do you know what your husband—yes there beside you—is up to? In his dream?”

Am I married? I thought I was a teenager. Actually I didn’t think about my age at all. And then it starts again—this need to run.

“For God’s sake, just stop running and I’ll fill you in.” His voice is shrill and slows me to a trot.

Can I do that? Yes. I stop running, put a hand on my kinking side.

“Now what?” I say when my breath’s returned.

Nothing. Whoever it was has gone away without even telling me what this husband of mine is dreaming in the bed beside me. Perhaps this person’s off to chastise someone else—this figment of my imagination. Surely that’s what it is.

I start running again. This time I’m in a tunnel. Rats scurry around me; a stream of brackish water runs down the middle and I try to plant my feet on the outside rim. I hear something in the distance, a whistle and the sound of metal wheels. It’s a train—a subway and as it bears down, whishing through me a second later. The cars are empty in this ghost train, and I feel relief when its intersection of my body is complete, when it hurries around the curve ahead.

“Neat trick,” the voice from earlier says. “But still, even the train was empty. Couldn’t you have dreamed up a passenger or two? How about an engineer, for Pete’s sake.”

“What about a movie star? They make for great atmosphere. Gary Cooper’s always popular. How about him? He’d be perfect for chasing you down an alley.”

Gary Cooper? I’m not sure I know who that is. “How about Brad Pitt?”

Had I wandered into some back alley of time? Was this supposed to be the dream of a woman in 1945?

“Look, none of it matters. What’s important here is for you to come up with a cast. Or at least a male you can interact with. You’re about to arrive in Munich. Can you see the lights ahead?”

I look around me and see I have landed. I’m in an airplane now.

“Now, think quickly,” the man said. “Who do you want waiting for you at the gate?

“That’s probably best. They know how to play their part.”

“Michael Caine,” I suddenly spit out.

Suddenly I saw him waiting in the crowd. I’ve always had a crush—since Alfie, I think. At least it looks like Michael Caine. Or what Michael Caine would look like if he were a woman—a tall, blonde woman with eyeglasses carrying—what is it? A knife.? He’s dressed to kill, I think, as I disembark. 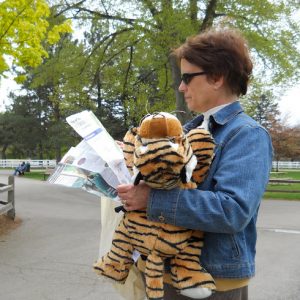 Patricia Abbott is the author of Concrete Angel and forthcoming Shot in Detroit (Polis Books). More than 135 of her stories have appeared in print, many of them with Shotgun Honey. She also published two ebooks (MONKEY JUSTICE and HOME INVASION) through Snubnose Press. She lives in Detroit. Her blog is http://pattinase.blogspot.com