The tiny austere interrogation room was congested, its air rife with tension. It mimicked in this way the stricken city outdoors, burning in its sixth straight week of a record-breaking heat wave, in its season of great disquiet.

“We don’t have all day, Daniel,” said the grizzled detective in a calculatedly even tone, the refined product of a lifetime of experience in exactly such encounters. “You haven’t answered my questions yet and we’ve been here hours, talking in circles about this and that.” The smell of sweat hung in the air, giving him reason to consider the putrid stench permeating the streets: in ill-fated conjunction with the record temperatures had come the city worker’s garbage strike. Streets the city through were teeming with refuse, bags and cans and dumpsters overflowing with it and the rats feasting in droves.

Seated beside him, Daniel Olander struggled, brow furrowed in thought, skin clammy with sweat, hands miming patterns in the air as he sought the words by which he might explain himself; until a queer look of peace came into his eyes, replacing the agitation that had characterized him throughout the entirety of the interrogation until then. He murmured, “I just…I don’t know how to say it except to just say it outright, but…”

“That’s okay, Daniel. Say it any way you want to say it. I’m listening.” The detective had softened his voice. He could be a friend and confidante, too, if the man beside him required it to spill his dark tale.

“I just…I simply really enjoyed doing what I…I relished and felt good doing what I did…because it was right to do.”

At this the detective stirred in his chair, though he sought to hide his excitement. “Did what, Daniel? What are you trying to tell me?”

The detective could sense the collective relief and celebratory cheer which erupted throughout the police headquarters at this long-sought admission from the man long suspected in connection to the heinous crimes. “Why is that, Daniel?” he asked calmly, watching the gaunt-faced man closely where he sat beside the small table. “What about it makes you feel good?”

Daniel Olander looked into his eyes when he answered, “Some babies grow to become murderers. Rapists and monsters.”

“And what does that make you, Daniel? If you’ve committed these crimes?” The detective sought to keep his voice level, to quell the fury and outrage and disgust from owning him, though he feared his eyes brimmed with it all. He was envisioning the sixteen infants he’d witnessed firsthand, their tiny throats slit from ear to ear, their chests riddled with great gaping wounds, drowned in pools of their young blood drenching the cribs in which they’d been discovered by horrified mothers and fathers and siblings.

Daniel Olander replied with a voice of wonder, as if providing a very obvious answer. “That’s exactly it, sir. I’m protecting you all…from me. I’m the baby grown old, you see? Better one black angel than many. Stop the children, stop the blackness. A cleansing, and then a new beginning. This is my gift to you all. Do you understand this?”

The detective grew livid, but hid his emotion well; and then frightened, and made sure to hide this weakness even better; and then, a brief moment of bewilderment stole over him as he sought to understand his great confusion of emotions; and then, unexpectedly, a great gratitude had swept over him, and he allowed it to show with a small sympathetic nodding of his head.

“Thank you,” he found himself telling the notorious Baby-Stabber, the bane and nemesis of the city throughout that entire heat wave-haunted, scorched and wicked summer, a moment later turning a stunned and apologetic glance to the video camera recording their revelatory conversation in the interrogation room.

He had an overwhelming feeling in that moment that a wind blew through the city from a place far and far away, relieving the people of the terrible and oppressive heat and stink like the first sign of winter heralding a respite from the long season of fire. 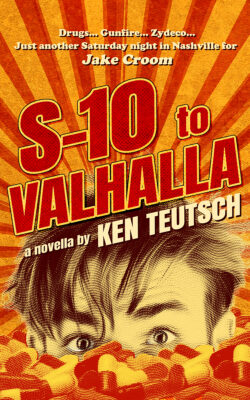