Carlos and I find a dead buck in the hemlock grove behind my house, in the shadow of the stone wall that divides my slice of the American Dream from Phil Barlow’s McMansion. The corpse has been tasted. Belly is ripped and shredded, acorns litter the gutted ribcage, hind legs are nibbled to sinew and bone. The forest won’t go hungry. But is this hunter or mange? Coyote or bobcat? I vote hunter. The buck is a beauty of an eight pointer, ten if you count the nubs broken off on the inside of his rack. (Fight with another male) An elder who lived a long life, and might have grown into a mythic beast, if a hunter hadn’t spotted him and thought, ‘Trophy’.

It’s enough to make you a vegetarian, but never mind—if he was shot on our property, we’ve got trespassers.

It’s not Barlow. He’s on the dark side of eighty. Knees are shot, the Big C is swarming up his colon (fitting death for a true asshole), and there’s no way anyone is hunting on his land. Barlow’s a greedy bastard. If he can’t have the meat, nobody will. His old, homemade hunting stands haunt the forest canopy, rotten triangles of wood—the treehouse as death trap.

We bend down, pretend to be trackers, but there’s no blood trail, and no way to tell which direction the buck bolted from. North is the wetlands. South is Barlow. West is us. East is five-hundred acres of undeveloped woods and bird sanctuary. It’s a beauty patch down here, an oasis of green and wild nature in this tame world. Carlos and I are hunters too, but our game is easier. Chicken of the woods, oysters, morels, lion’s mane, puffballs—any mushroom we can sell or cultivate. My favorite is a species called Inky Cap. You nibble just a bit and it makes alcohol taste rancid. Helped me kick the sauce. I grind it into powder, too. Hella lot cheaper than popping Antabuse. Wish I could market it, but the FDA would cackle.

Carlos lifts the buck’s head. I take some phone pics. We mark the spot and walk back to my driveway, where I’ve hung game cameras—pointed at the road—to spy on the two-legged critters. I download footage. Hours of quiet macadam, a damn art film, until dusk—the buck enters a thicket of bittersweet right below the road.

Minutes later, a red pickup slides into the foreground. A muzzle pokes out the driver’s side. It pops, the buck shudders, bolts into our land. The gun retracts, door opens, out steps the barrel-chested shooter. He looks over his shoulder, waddles across the road, gazes into the woods, clearly says ‘Shit’, shrugs, retreats to his truck.

Phil Barlow, for all his faults, at least sat in the hunting chairs, waited for his prey in five-degree Artic blasts. Chad Barlow pretends to subsist off the land, but it’s all Costco and Netflix, and his hunting chair is behind a steering wheel, like he’s ordering fast food at the drive-in.

We check the time. High noon. The old man will be home. Sick men don’t travel.

Barlow’s lawn signs are an advertisement for right-wing geriatrics. Cancer research. Trump/Pence. Repeal the SAFE act. And in the driveway—Chad’s red pickup.

Barlow answers the door, a withered parsnip. He looks at Carlos, shakes my hand.

As if he’s a toddler. Just as well. We show Barlow the footage. He grunts, “Stupid kid.”

Carlos says, “It’s out of season.”

“Chad’s getting a divorce,” Barlow says. “And lost his job.”

The Inky Cap powder glows in my pocket. If you ingest it without knowing and go on a bender? Heart attack. KGB used it. Long Siberian nights, plus vodka. Untraceable. Chad’s a drinker. I know his pub. I’d have to slip into his burger. Just an idea, all that separates man from beast, but it’ll keep me warm this winter. 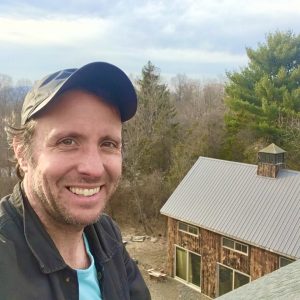 Matthew Mercier is a writer and storyteller living in the wilds of upstate New York. He’s a graduate of Hunter College, and his work both appears and is forthcoming inGlimmer Train, Rosebud Magazine, Creative Non-Fiction, Fairy Tale Review, and Mystery Tribune. He’s told stories with The Moth and been heard on NPR’s The Moth Radio Hour. Most recently he was awarded the Leon B. Burstein Scholarship from Mystery Writers of America towards completing his first novel, Poe & I, based on his time as caretaker for the last home Edgar Allan Poe. He lived in Poe’s basement.