The blade slid warm across Sonny’s lip, grape jelly sweet on the tongue; tip toes strained on a Bud thirty-pack: had to see over the kitchen counter to spackle stale sourdough. Was wiping the switch with his t-shirt when a slap jarred his skull, sending the knife to blistered linoleum. Pops didn’t say a word, like always, closing the blade back into a pocket. Winston ash dangled over Sonny’s chipped eyeglasses, smoke blanketing the brain.

A disheveled brunette in sweatpants emerged from the bedroom. Sonny always focused on her interesting toenails, reminded him of Easter eggs—ones Frankie showed him at recess that time.

She wasn’t his mommy.

Didn’t really know her at all.

Pop came back with her after Judge Dick sent him on a ninety-day “vacation.” She squatted to his level, mascara snaking out eye sockets. He lifted both arms as she tore the stained shirt up over his face and dabbed it under the faucet; Lomita Sheriff emblazoned the heart: Pop’s dream job, snuffed by too many vacations. Sonny remembered him telling mommy, “Could bear arms at all times, babe—no hasslin’.” Never quite understood. Pop had arms all the time—same kind Sonny had high in the sky. Arms were arms, right?

Real mommy lived at that silly hospital on Carson Street—but not all the time. Sometimes she would get lost on adventures. Last time Granny took him to visit they shared a pack of Zingers. Sonny longed to give her another hug—maybe they’d have Chocodiles next time, long as she could laugh and scream in peace. The good doctors loved her so much, that’s what Granny said. Granny was nice too, always letting him roam Western once she drank the world’s biggest juicebox. Soon as she began snoring, the world was within reach.

Raindrops peppered windows. His textbooks needed a plastic bag; could see ’em stacked on the pink couch. Dinner table held three plump grocery bags. Grabbed one, unloading its contents: tall amber vials that rattled like baby toys. Headed for his books, careful stepping through the living room: bodies were strewn about the carpet, shaking and snoring—sweat beading off every brow. One of the dozers remained upright on the couch, nodding gibberish out the lips, extension cord strangling a forearm.

Sonny gazed at the man in wonder, loading Math and Social Studies into his sack. Not so fun anymore. His only pen wasn’t in the Trapper Keeper. Dug an arm between sofa cushions to fish. One handful produced a Pringle and three gold pellets, ones Pop put in “big boy toys.” Second try unearthed an empty baggy, flecked with sticky brown dregs.

Eloise snatched it from his hand, jamming the wet shirt back over his face. “Get ’long now. Gonna miss da bus, mijito.”

She sucked a false front tooth. “What?”

She peered out the window, swiping a black beanie from off the floor and handing it over.

Sonny pointed to the kitchen.

Eloise rushed to wrap his sandwich in Kleenex. He dropped it atop books as she spanked him out the door.

Park was quiet this time of day, trailers scattered catawampus, just like Pop’s pals at home. Wondered if Frankie would crash on his floor someday, when they grew big—share shiny pellets—vanish on long vacations thanks to Judge Dick. Hopefully no crying on Carson Street though…just adventures.

Rain had ceased; Torrance Transit bench glistened up ahead. Frankie would board near the stone train bridge; they’d split the sandwich: Frankie never had breakfast. Winter chill didn’t burn much anymore, just cold, blue. Pop was right: “Dis T-Town, Sonny. Don’t need no jack-it.” He removed his glasses and pulled the beanie down over his face: three harsh slits circled the eyes and mouth. A slow dance on concrete brought warmth, arms wiggly as wet noodles. Creeping cold felt nice; soul clouds leaked with every breath. Today wasn’t so bad. Embraced the chill—took his mind off stuff, for now. 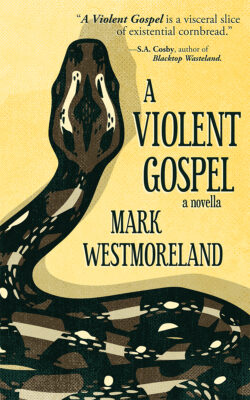