She glances up from her book, surprised.  It’s early, still, and she thought she had the beach to herself.  Squinting in the sun, she sees a man at the water’s edge.

She’s just washed her hair, and her sandals are brand new and she doesn’t want to get them wet.  “No, thanks.  Bit cold.”

She pouts, shifts a little in her deck chair.  The sun’s warm and she hasn’t finished her drink.  She knows it’s too early for wine, but she’s on holiday and surely one little glass can’t hurt?  “No, really, I’m fine.”  But he’s watching her, and smiling, and deep down she thinks he’s rather handsome, if a little older than she likes, with short grey hair and a neat little goatee beard.  Perhaps she could, just for a moment, if she banishes her fear…

He’s right, she finds.  The water caresses her ankles like soft warm billows of wool.  It’s hard to believe it could do her any harm.

“Why not wade a little further out?  Just up to your knees.  Come on!”  He holds out a hand to encourage her, and she follows his lead.  “You can feel the sand squidging between your toes.”

She laughs, because he sounds just like her nephew who’s six years old and still gets excited by sand castles and crabs.

He takes her arm, fingers gripping just above the elbow, hard enough to leave little marks.  It should be comforting but she feels like a rabbit in a snare, although she can’t think why.  It’s just his fingers; she could break his hold in a flash.  Even so, she tries to hold back.

“Why are you so nervous?” he asks.

She admits she never learned to swim, and casts longing glances back to her half empty glass.  Half empty, not half full, because that’s the way wine is.  You only mean to have the one, but then you find you’ve finished it and have to have one more.  She’s left it in the sun, and now it’ll be spoiled.

“Can’t swim, you say?  That’s unusual for a woman your age.  There’s no need to worry, though – I’ve got my lifesaver’s certificate.  I can get you back to shore.  Or could, if I wanted to.”

It’s an odd thing to say.  He’s not smiling any more and the look on his face frightens her.  Should she have trusted him?  He could be an axe murderer for all she knows.

He sees her looking and unfreezes his face with a grin.  “That’s it, up to your waist.  Look how far we are from shore.”

She turns, and gasps.  Her deck chair is a speck, her book and wine glass smaller still.  She wants to go back, but he’s leading her into water that’s far too deep.  She stretches, but her toes can only just brush the sand.

She can’t think why he can’t think, because it’s clear to her.  She’s out of her depth in more ways than one.  The waves toss her up a little, down a little, and now she can’t feel the bottom at all.  She’s totally in his power, and as if he knows it, he lets go her hand.

“I thought you said you couldn’t swim,” he says.  “You’re swimming now, though, aren’t you?  If you can call it swimming with all that thrashing about.  Why not stop struggling and let yourself go?  It’s so much easier in the end.  Just sink, and float, and sink again.”

The sun glitters on the empty sea.  The shore is out of sight; there’s only him, and her, and the vast expanse of dappled, rolling blue.  She grits her teeth, spits water, mouths a few exhausted words.  “Who are you?”

He smiles a distant smile, eyes on the horizon, not looking at her.  “No one really.  Just an ordinary guy who lost his daughter when some stupid woman drank too much and ran her down.  But you wouldn’t know anything about that, would you?  So come on in, the water’s fine.” 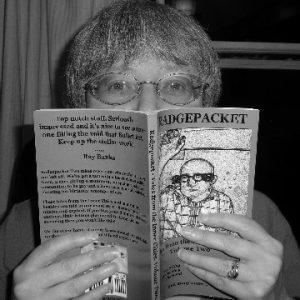 When she isn't being a pane in the glass, Fiona lives in a slate cottage within stone-throwing distance (never a good idea in Glass houses...) of England's largest lake.

From her compact-and-bijou study she writes pretty much everything from paranormal to romance, but her particular love is gritty contemporary fiction with a strand of dark humour running through it.

Many of her stories have been published in anthologies, magazines and online, most recently with Riptide Publishing, Byker Books, Shotgun Honey, Pulp Metal Magazine, Mslexia, Paragraph Planet, and The Pygmy Giant.