“You know, everyday it seems like a new one just ups and vanishes,” Barry said as he clicked through the missing and exploited children lists. “Like sweet, little ghosts. Poof and gone.”

Barry leaned back, the chair creaking on the hardwood floor. His computer’s glow haunted the room; the watery yellow from the street lamps failed miserably to fight through the streaked windows.

A cop car rushed by and Barry spun around. Red and blue splashing along every front porch, every house address, every bit of sidewalk the elementary school kids walked as they past Barry’s place to the K-5 down the street. He would watch them through the window’s collection of silt and dust, sipping coffee. “Just sweet little ghosts in waiting.”

He turned back to the computer, rocking in his chair and hearing the floor squeak. He had eight tabs open in the browser, each one a different missing children website. “Sweet babies,” he whispered as his cursor hovered over every picture. Traced the lips and nose and ears and hair.

Barry found a drop down menu which simply read found/rescued/returned. It had a string of photos, each one with the word HOME stamped across it in huge rubbery letters. His eyes crawled along the text. He snickered. “Maria … Alana … Tess … Mikey … Leyla … but no Lexi. Nope, never a Lexi.”

He slowly looked to his mantle, stared at her picture. His little sister. “Happy thirtieth birthday, sis.” He stood, ran a thumb down her first grade cheek. The picture smacked of all the things in the 80s which had been drowned out after she disappeared from the park that day. Her poofy bangs, her neon colors and hefty shoulder pads. His mind drifted to the park where the big slide was dressed up like an elephant. One second she was looking to climb up it, the next second she was gone forever. A sweet little ghost.

“Lexi, you know I look at every little girl named Lexi and I see you.” He was starting to slur his words. A line of beer cans ran along in front of the computer; a row of shiny soldiers between him and the missing children. “I always hoped you’d escaped somehow, someway. Maybe the kidnapper got sloppy, and you escaped. Found the police. Led ‘em right back to the kidnapper.”

He flopped back into his chair and opened a beer. Killed it in one pull. “But no. Now every time I see a girl named Lexi, I think she’s you.”

The floor boards squeaked under him and Barry hammered his boot tread down onto it. “Shut up! Shut up down in there! You’re not listed on the websites yet so your parents obviously don’t give a rat’s ass that you’re missing! I won’t hesitate to shut you up!”

He stomped his foot like the new little girl down in the hidey hole was instead a rowdy apartment neighbor, blasting heavy metal at all hours of the night. “Stop squeaking, Lexi! Just shut up!”

Barry stood, nearly stumbled. Drunk. The floor squeaked  as he balanced himself. He leaned one direction, listened to the subtle pitch and squeal of the wood. Stress eeked out in small gasps as the cutaway flexed, bore weight. He leaned another way, a little less protest this time. He squatted, trying to make music out of the hole’s lid.

But, he had done this often enough to where he noticed a small difference in pitch. Ever so slight.

“Lexi?” He worked his fingers along the seam, digging for purchase the way all the girls did over the years when he shut the lid on them. The lid was thick but hollow; he stuffed lead weights into the interior. Helped keep it shut. No need for a padlock that way.

Vomit crept up in his mouth as he lifted the lid. Empty. Barren. He’d gotten sloppy on his sister’s thirtieth. The empties standing sentinel were from his second beer run. Maybe— maybe she had—

“Lexi!” Barry spun on his heels and nearly fell over. “Lexi! I’m not done with you! Where did—”

Reds and blues splashed along his house. This new Lexi must have done what he wanted his sister to do. Find the police. And lead them right back to her kidnapper. A sweet little ghost coming back to haunt him. 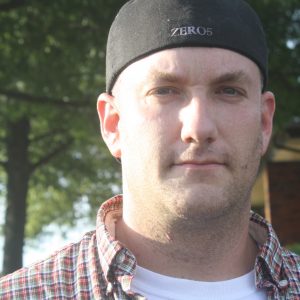 Ryan Sayles is based in the Midwest. His hardboiled private detective series featuring Richard Dean Buckner is forthcoming through Down and Out Books. The first two novels, Subtle Art of Brutality andWarpath, will be released in July and October, 2015. His short story collection, That Escalated Quickly! is out through Zelmer Pulp. His chapbook Disordered Mullets was released by Weekly Weird Monthly. His Buckner novella Disco Rumblefish was published by All Due Respect Books as part of the Two Bullets Solve Everything split with author Chris Rhatigan. Ryan’s short fiction has been widely published online, in anthologies and in print. He’s been included in the Anthony-nominated Trouble in the Heartland: crime fiction inspired by the music of Bruce Springsteen, as well as Dark Corners magazine, Shotgun Honey, Crime Factory and more. Ryan is a founding member of Zelmer Pulp, a writer’s group dedicated to genre fiction. Their multiple publications span numerous brands of fiction including zombies, science fiction, westerns and more. He may be contacted at www.vitriolandbarbies.wordpress.com 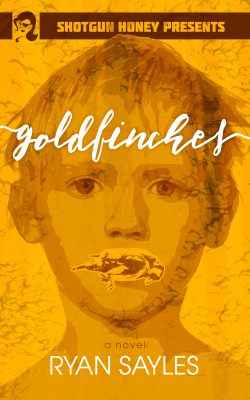