The day they killed Frank Watson, I was three hundred miles away, fly fishing in the High Sierra. If I’m honest, I have to say I ran out and left him holding the bag. True, I’d had the fishing trip planned for months, well before I’d ever heard of Dave Silva or Rawcliffe Construction. But trips can be canceled, plans can be changed, and there’s no denying that I knew it was a happy coincidence that had me leaving town the day after the story ran in the Tribune, with my byline on it and Frank quoted liberally as the unnamed source.

Frank was raking his lawn when an old, rust-stained Impala pulled up at the curb.  One of his neighbors called 911, but the whole thing was over inside of two minutes.

Of the four men in the car, only the one in the suit was actually holding a gun. He stood on the sidewalk, glaring up and down the street. The two heavy ones, young guys with buzz cuts, threw Frank down on the lawn and pinned his arms. The fourth, a whip-thin Mediterranean type, broke Frank’s rake over one knee and plunged both broken ends into his throat.

I’d known Frank and his wife, Gretchen, since high school. We’d have dinner or drinks together every couple of months. When he started complaining about the crooks at Rawcliffe, at first I just took it as the grousing that businessmen do about their competitors. Frank was Red Bluff’s premier contractor; Rawcliffe was new in town, and they’d poached a couple of his clients. A source inside Rawcliffe, a soil engineer named Dave Silva, was feeding Frank information about their methods: money laundering, insurance scams, roughing up labor organizers, payoffs to inspectors and politicians.

At first Gretchen had insisted that he should go to the police. But Frank suspected that Rawcliffe had friends in the department—more friends than he did, anyhow. And I wasn’t about to argue him out of giving me the story.

It was two days after it happened that I got the news. I was camped at Summit Lake, fifteen miles from the Palisades trailhead. Late afternoon. The trout were swirling the glassy surface of the water and ignoring every fly I served up.

When I heard someone coming down through the trees to the lake, I had a feeling, but I told myself I was wrong.

And I was, sort of, because it was Gretchen. She was breathing in loud, uneven gasps. Her makeup had melted, so that she looked like someone had taken a blowtorch to her face.

She didn’t say anything, just walked up to me and started beating me with a stick.  I stumbled and fell as I tried to back away.  As I lay there on the ground, trying to protect myself, she pounded ineffectively on my arms, my legs, my head, whatever she could reach.  Finally her strength ran out.  The stick fell to her side.

“They killed him,” she said.  “You idiot. How did you not see that was going to happen?”

“Shut up.” One more wild swing with the stick. She told me then how it had happened: the Impala, the four guys, the rake. I realized what it was she’d been beating me with—the rake handle, splintered and bloodstained at one end.

Her face contorted as she reeled off the details.

“You’d best not come back to Red Bluff,” she said finally. “They’re looking for you.” She threw the rake handle in the water and walked away.  I barely heard her parting shot. “And I hope they find you.”

A cold breeze was blowing down from the glaciers as I packed up my creel.  Blood had crusted in my hair; my ribs were sore, and my arms were swollen and discolored. Sunlight still flecked the Sierra crest, but the North Fork basin was a bowl of deepening shadow. Hovering in the dark crystal of the lake, a young trout fluttered its fins, then shot away in one electric motion as my shadow touched it. 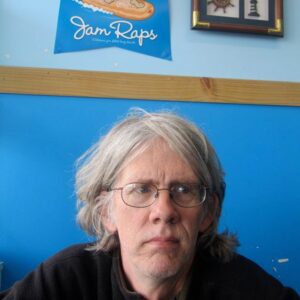 Tom Gartner’s fiction (of various genres) has appeared in numerous journals. One story was nominated for a Pushcart Prize. He’s currently finishing up a mystery novel. He lives in California, just north of the Golden Gate, and works as a buyer for an independent bookstore in San Francisco.