When you’re a cop in Sucker Creek, the only calls you get are from the Reservation. It’s Reservation business until it’s not: one gunshot too many or a woman who won’t stop screaming on her own and then it’s your problem. When you’re a cop in Sucker Creek you show up too late and a woman is screaming you never do anything he’s just going to come back after you get the cuffs on him and you both know she’s right.

When you’re a cop in Sucker Creek you hear a call for service and it’s ten fifty with a rollover and in Sucker Creek they don’t have speed limits so you can stop for coffee on the way; nobody puts on sirens. By the time you get the call whatever happened already happened. Driving with the radio down all you hear is you never do anything he’s just going to come back. You find the rollover and reporting party is already gone. Single car accident, no seatbelt and when you find the driver twenty feet thrown, the frost on his body glitters like heaven. First gold light of the morning, arm outstretched in glorious repose, wedding ring on his finger. When you’re a cop in Sucker Creek and you knock on the door to deliver the news, you don’t mention the beer cans you found in the car. Those beer cans change an insurance payout, probably isn’t one, but they don’t make it into your report all the same. The woman howls, quiet because she lost all the breath and can’t figure out how to get it back.

When you’re a cop in Sucker Creek people ask you how you got such a shit job and it’s who did you piss off? and you must have fucked up royal and nobody ever thinks maybe you were the gal who said he was unarmed at the wrong time in the wrong deposition and the contents of your locker were out in the freezing rain, Saint Paul winter, and being a cop in Sucker Creek has problems but nobody dumps your shit in the parking lot.

When you’re a cop in Sucker Creek you can stand there with a widow whose husband died in a culvert; maybe your only call for service the entire day or maybe too many to count. Watch her drink to get drunk right in front of you. No judgment because when you’re a cop in Sucker Creek the VFW Hall closes at nine most nights and he’s just going to come back on a loop in your stomach until midnight at least so you drink at the kitchen table from a plastic cup. The widow in front of you, heaving sobs coming smaller and smaller until they crumble into a tuneless hum and she rests her hips on a couch they keep on the porch. Arm still outstretched toward the bottle, wedding ring on her finger.

When you’re a cop in Sucker Creek, you see the same calls, same cars, same faces. Solo vehicle, paper plates crinkled and unreadable and maybe you’ve seen this car before or maybe they’re all the same. Windshield like frozen lakewater and the woman inside, single occupant parking lot possibly intox, a shadow in the passenger seat. You knock until your knuckles ache in the cold and when you pull the handle she spills out from her weight against the door and all you can do is guide the body to the ground. You’ve seen her before you never do anything he’s just going to come back. Your gloves are off, her face colder than the air. Scratch marks on her chin and jaw raking down like burnout on a highway; broken fingernails from where she tried to claw him off her neck. 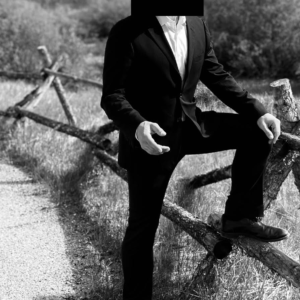 AD Schweiss is a lawyer who lives and works in Northern California. He's on twitter at @ADSchweiss