Here is the Hudson, its oranges and whites spangling the darkness lapping the Upper West Side. Overhead is the etherized loom of predawn. Stars? None visible, but 33 stories up is a large tinted window.

Here, 16 feet behind that window, is a camera on a tripod streaming live to social media, where 4,372 viewers are focused on the dark lump on the bed, the covers atop Falk. The lump extends a limb that taps the clock radio. The covers lift. Falk’s silhouette, now vertical, bends back to the bed and reaches under the pillow. He carries the thing to the window and gazes down at the tittering crevasse that is the Hudson River before sunrise.

Falk never took shooting seriously until that hour. During that hour, the cops shot him dead center, a face-on snapshot, which got shamed on national TV and social media many times over. Overnight, his shot became as recognized as the decade-old flattering one of his wife Debra, always shown on TV right before his. Through it, he will be linked forever to Debra’s pretty face grimacing into the Maui sun.

Then they came for the rest of his life. First, the cops ransacked his apartment, rifled his computer files, planted bugs. Right behind were the paparazzi. Waiting to get a moneyshot of who—according to a Post headline—was the ‘The Devil Who Killed Missus Jones’, they blocked the front and service entrances of his building. Next came email messages, calls, and cyberbullies, who promulgated fake shots of him partying with frocks so flimsy Falk almost wished the shots were real. Then he started finding dozens of fly-size cameras perched all over—inside a lampshade, under his desk, behind the toilet, in his closets, behind the bulb over his stove.

That he’s the main person of interest was unfair—all their evidence was circumstantial. It’s better I tell a story than wait for them to tell one for me. The next morning, Falk bought ProFo cameras and mounted them all over—the bedroom, the bathroom, the kitchen, the livingroom—and began streaming 24 7 on social media. He streamed himself cracking eggs, leaving and coming, cussing into the phone, feeding Debra’s cat Sandy, snoring, and sitting on the toilet watching himself on his phone sitting on the toilet.

That he was outdoing the cops and cyberbullies at their game almost felt reward enough, but after two weeks, the initial wave of 1 million viewers dwindled down to a few hundred. He decided to up the ante. On the first night, he stabbed a pillow to death. The next night, he chased Sandy around the apartment and terminated 8 of her lives with the rubber-grip squirt gun. On the third night, he butchered Muncie, Debra’s teddybear, and baggied and froze the parts. On subsequent nights, he defrosted and marinated cuts of Muncie, and stir fried, roasted, barbecued, and loafed them. Viewership mushroomed. Falk was on a roll—until he ran out of Muncie.

Last night, Falk mimed counting out bills and handing them to a trench coat with an upturned collar. He pointed out his window towards the pier across the Hudson where they recently poured concrete. This morning, the hug of the jut of the rubber-grip gun against his palm and the slosh of its sudsy ammo rallies him. Falk will wait til first light.

He shakes up the suds and places the nozzle against his chin. This is the way, this will be my money shot.

Rat-a-tat-tat goes the dishwater speckled with suds. Under the bed, Sandy, down to her 9th life, the only eyewitness to everything, mouths what lipreaders (if they could see) would interpret as ‘meow.’ Back against the wall, Falk slides down, out of range of the orange-purple glow. To his viewers, the suds shimmering on the wall are brain spatters tittered by dawn’s first light. Death begets desire for more. To Falk, he’s just another guy paying for a mistake. He jostles a pair of buttons－Muncie’s eyeballs. Here, beneath Falk’s bed, three pairs of eyeballs: seeing, unseeing, not seeing, and one unseen－those of Debra down here. 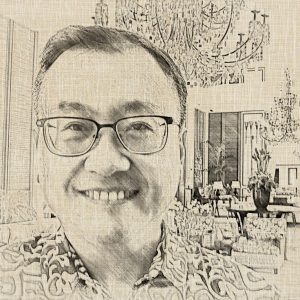 Kenton K. Yee's fiction & poetry has appeared in The Los Angeles Review, Strange Horizons, Daily Science Fiction, and Uncle John's Bathroom Reader, among others. He enjoys mystery and crime in high tech settings. Trained in physics and law, he writes from northern California.