At the penny carnival for St. Teresa of Avila’s Day, Elena is volunteering at the dart toss booth when she sees Jack The Coyote.  He is carrying a baby who’s nearly a decade younger than Elena’s dead daughter Camila should have been.

Jack The Coyote saunters out the gym doors.  Elena abandons the booth and watches him hand the baby to Maria Hermosa while he rummages in an old Chevy for a diaper.  Elena stays hidden though surely he cannot remember her.  Jack The Coyote must have trucked thousands across the border in his time.

Ten years ago Elena handed him a wad of crinkled currency in Nogales and he tickled six month-old Camila’s cheek and said to call him “Jack.”  Jack The Coyote.  He led them one day into the desert and abandoned them at nightfall.  Spotlights came playing over the desert rocks with shouts in English, and when she stopped running, Elena was hopelessly lost.

Then came four staggering days in the trackless desert wastes, plodding alone with Camila in her arms, no water, no, none anywhere. She wrenched spittle from her mouth onto Camila’s tiny tongue by day and she curled all her warmth into the shivering form at night.

By the fourth day, Camila was gone.  Elena could not cry.  Her body refused to part with even those few salty drops.  And now Jack The Coyote, casual cigarette in hand, crosses the playground of St. Teresa of Avila’s School, where Camila should have played.

Elena finds fat old Lupe Vilar sitting on a folding chair eating a deep-fried burrito.  Jack The Coyote is at the Dunk Tank not thirty feet away.

Lupe Vilar looks at her out of fat cheeks.  “Yes,” she says.  “They’ve got a pretty baby, you know.”

Elena arrives at Jack The Coyote’s single-wide trailer.  The dusty sun sinks over the Chevy.  Elena has shadowed Jack The Coyote for days.  She knows he will be inside, Maria Hermosa will be at work, and the baby will be with aunty Lupe Vilar.

Tumbleweeds are imprisoned under the wobbly plastic steps which Elena mounts to knock on the door.  She grips the stiletto in her pocket.  When the door opens she has to free her hand to keep her balance.  Jack The Coyote looks down at her.

“Saint what?” says Jack The Coyote.

No, no sign of recognition on his face, only one of habitual appraisal.

Jack The Coyote nods.  Elena steps into a waft of dirty diapers and cooked grease and stale beer.  The door slams behind her.  A long throaty wail comes from in back.  The baby is not with aunty Lupe Vilar.  The baby is here.

A white hot flash rockets up Elena’s gut.  She doubles over as Jack the Coyote next cuffs her on the side of the head, open-handed, careful to draw no blood.  Elena drops to her knees as Jack The Coyote extracts the stiletto.

He drags her by the hair into the bathroom.  Yanks her head over the bathtub rim and in one smooth motion runs the knife across Elena’s smooth exposed neck.  He holds her head in place so no blood runs on the tile with one hand and with the other rips the shower curtain down.  He spreads it on the floor and then lowers Elena onto the plastic gently as a lover.

As the baby wails, Jack The Coyote washes the blood from the knife above a mound of dirty dishes.  He sets the wet and clean knife on the counter and goes to the baby.  The girl conceived in a promise to Maria Hermosa that he will never return to the border.  Now the border has come to him. 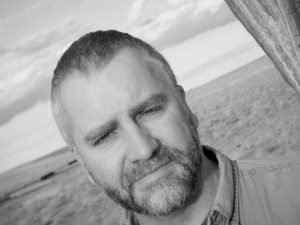 Court Merrigan lives in Wyoming. He’s got short stories out in Thuglit, Needle, Weird Tales, Plots With Guns, Big Pulp, Noir Nation, and a bunch of others. His story “The Cloud Factory” was nominated for a Spinetingler Award. Court’s short story collection, MOONDOG OVER THE MEKONG, (Snubnose Press) is available in print and ebook. Court is represented by Adriann Ranta at Wolf Literary.