Terry awoke on his neighbor’s porch swing. He was cold and confused and the first thing he saw was Brad Monarch’s shit-eating grin.

Brad folded his massive, tattooed arms. “You were snoring so loud you woke the whole house up.”

“You know, you’re getting quite the reputation. You’re the Village Freak.” Brad cackled at him. “Wandering the streets late at night, spooking people.”

“I made an appointment with the doctor—”

“And what’s with those SpongeBob SquarePants boxers? Aren’t you supposed to be a grown-ass man?”

Terry rubbed his eyes. Out of all the porch swings he could have wandered to, of course it had to be Brad’s. “It’s not SpongeBob. They’re—”

“Whatever, Freak. Now let’s get you back to where you came from.”

Brad grabbed his arm, lifted him to his feet like he was a child.

As they crossed the street, Terry wriggled from his grasp. He couldn’t see shit without his glasses, but he wasn’t about to take “help” from that asshole.

His wife, Jean, was waiting on their front doorstep in that hideous peach nightgown, shaking her head.

She spoke to Brad. “Guess he wandered out of the house again, eh?” She snorted. “Unfuckingbelievable.”

Terry woke up exhausted. He went downstairs and poured himself a bowl of raisin bran. His teenage son, Peter, sat at the table. Jean was making an omelet.

He couldn’t help but notice they were looking at each other, giggling. A ball of ice formed in his stomach.

“Nothing, nothing,” Peter said between giggles. “It’s just that I found you in the hall last night. You said you needed to go to the bathroom. And,” Peter was laughing so much he had trouble finishing the story, “you dropped trou right there. Just untied your pajama bottoms and pulled them down all the way to your ankles.”

“He had to redirect you to the bathroom.” Jean was cracking up, too. “Otherwise you would have peed all over the new carpets!”

Tears streamed down Peter’s cheeks. “I don’t think you were conscious for any of it!”

“It’s incredible.” Jean gestured at her husband with a spatula. “He did it twice in one night—that must be some kind of record!”

“Now this isn’t funny at all,” Terry said. “It’s an extremely serious…”

He stopped talking. He couldn’t even hear himself over their laughter.

One night, Jean told him she was going to buy a set of restraints.

“Tying you down to the bed—that’s the only way to make sure you don’t embarrass this family anymore.”

Terry curled into a ball and flicked off the lamp beside him. Exhaustion defeated anger and instead of arguing, he went to sleep.

He awoke several hours later outside, cool breeze at his back, bloody shovel in his hands, and Brad Monarch lying at his feet.

The beefy man raised a big, trembling hand. “Please, please stop, Terry. You—you can take my shovel. I didn’t mean to get in your way.”

Terry tightened his grip on the shovel’s handle. He wanted, very badly, to bash Brad’s skull to a pulp.

But if he did that, he realized, he would sacrifice his newfound power.

Brad scuttled away like a hermit crab, made it to his feet, and ran.

Jean made him breakfast, fetched his newspaper, gave him massages.

He started borrowing tools from Brad just to watch him cower.

He canceled the appointment he’d made with his doctor. Sleepwalking was no longer a problem. 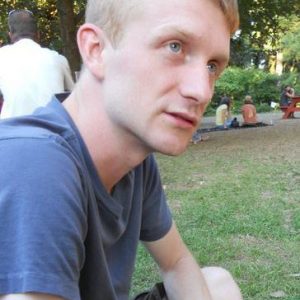 Chris Rhatigan is the editor of the crime fiction quarterly All Due Respect. He is the author of more than 50 short stories and the novella, The Kind of Friends Who Murder Each Other. He lives in northern India.